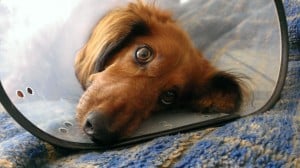 Today was a pretty routine for Shaggy. A lot of lying around and not much else. We were supposed to take him to the vet today for them to take another look at hid bandages. Unfortunately, every time we called, they asked us to call back in a couple of hours because they had an emergency coming in that would need surgery or other attention. Sad to think there were that many pets that needed emergency care today. They finally suggested we bring him in and leave him there so that they could work with him as time freed up, and we would come pick him up when they finished.

It took a few hours, but we finally received the call to come pick him up a few hours ago. They decided that he needed to keep the bandage on, so he came home with a fresh bandage and a blue wrapper this time. They did decide, however, that he no longer needed the drainage tube on his back, so they removed that, added a couple more staples, and sent him home. Our next visit is on Monday, and we’re hoping they can remove the drainage tube by his rear leg. They tried to figure out a different way to route it, but with his short legs and general shape, they don’t have an alternative.

Otherwise, he is doing well, and continuing to make progress.