Shaggy’s most recent vet appointment was on Friday when he was supposed to have his staples removed. We’ve been taking him in the evenings since his doctor has been working the overnight shift. We called in advance like we always do and confirmed it was quiet and a good time to bring him in. By the time we arrived, however, they had a dog in surgery and they didn’t know when they would be able to get to Shaggy.  We left him there so that they could work on him when things quieted down and went home to wait for the call.

They called us around 10 PM and told us Shaggy was still waiting. The dog that was in surgery had a ruptured bladder and they were trying to get it stable without any ETA in sight.  I really did not want to leave him there overnight again, so I said I’d wait.  And I did. I waited until around 12:30 before finally getting the call to come pick Shaggy up.

They removed his staples and everything was healing well except for one spot on his back. They found some fluid still there, so they reopened one incision and massaged out the fluid. No infection, just the kind of fluid that seeps into an open space like that. With the fluid removed, the skin and tissue are better able to reconnect. So for the next week we’re supposed to put a hot pack on him and work out any fluid. I didn’t have much luck doing it today so we’ll see how I do tomorrow. Not sure if I’m just not doing it well or if there wasn’t fluid to get out. I’m hoping it is the latter, but I’m not convinced of my medical skills, so it definitely could be me.

The other issue the vet commented on was his back leg.  Shaggy continues to drag his paw, and the vet said that he had hoped once the tube was removed he’d start walking normally. It is possible the scar tissue and general condition of that area is to blame, but it might also be the result of nerve damage form the attack. Time will tell, so we have to be patient and see what happens. Shaggy may need to have physical therapy to help with the leg.  Shaggy is able to get around the house and can actually move quite nimbly on three legs with the bad leg held up so it never hits the ground. That walking style isn’t useful outside though. With the grass and unevenness of the lawn, he tires easily. And with the stairs, there’s still a lot of picking up and carrying at times.

He is without a cone, however, now that the staples and stitches are out.  Progress!

Here’s a picture of him as he was today: 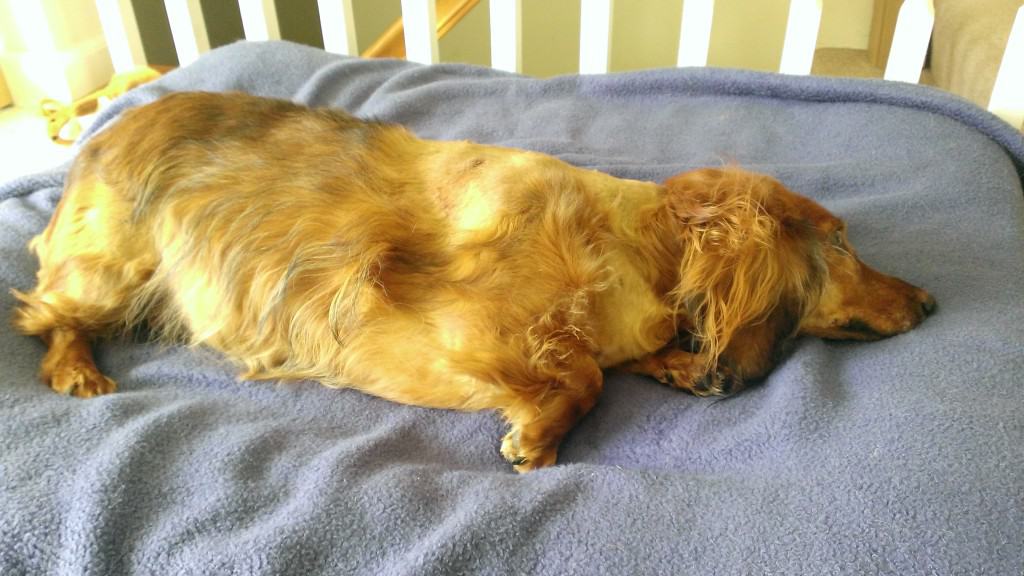