Skip to content
HomeTechEdTechEd 2012: My Bags are Packed… and Shipped

No, I haven’t packed my suitcase yet for Microsoft TechEd 2012 in Orlando. We’re still several weeks away. I did pack all of my conference bags from previous TechEd’s however, and shipped them to Renton, Washington.

Last week I received an email from Brandy Pepper (yes, “The” Brandy Pepper), asking if I’d be willing to lend my collection of bags for a display showcasing 20 years of TechEd bags, a Bag Museum if you will. Of course I said yes. My only regret was that I only had bags going back to 2007. A few years back I gave away my bags from 2003-2006. They were piling up in my office, and I foolishly decided to let them go. Of course I regretted it the next day, but it was too late. I’ll never make that mistake again.

A tweet also went out last week from @TechEd_NA as they worked to fill in the gaps.

I saw a tweet from someone the other day who thought they had a bag from the first year, 1993, so hopefully we will have an entire history of every year onsite.

So Monday morning I packed the bags for shipping. I photographed each bag as it was packed, so here is a sort of “reverse-unboxing” of the bags. You can click on each photo to see the full-size photo.

The first bag into the box is TechEd 2007. We were in Orlando this year. Typical backpack style 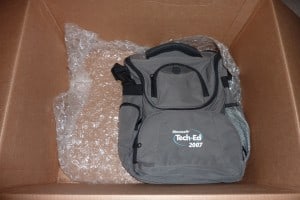 Next bag is TechEd 2008. We were back in Orlando. Another backpack, although a bit more rounded, and sponsors were added to the front. I never liked the zippers on the front. Just saying. This was the year of the split conference, one for IT Pros and one for Developers. While I thought it was a good idea at the time, like the zippers, I no longer think it was a good idea. Split conference means a divided #TheKrewe, and that just won’t do. 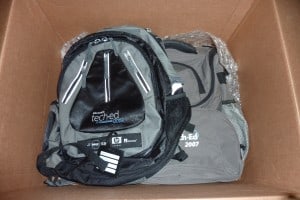 My favorite bag… TechEd 2009. We were in Los Angeles that year. The sponsors stay front and center again. I’ve always liked the messenger bags. The backpacks work great at the conference, especially if you’re trying to cram swag into them (who, me?), but the messenger bag is the style will keep using after the conference. Looks and works great. 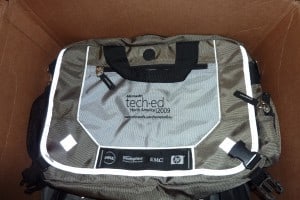 TechEd 2010 went back to the backpack.  We were in New Orleans that year, and it will always be one of my favorite conferences. Met some special people at this one. This ranks high up on my list of conference bags. I really liked the colors and the somewhat unusual design on the front. 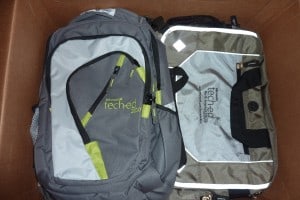 And last but not least, the 2011 bag. The conference was in Atlanta last year.  While this conference was one of the best years ever for me at TechEd, the bag is not my favorite. It gets high marks for capacity, but it is very drab looking and I didn’t like the snap. Functional for the conference, but it isn’t one I’ve ever used again.

So there you have it, five years of TechEd history. Makes you want to see all 20 bags now, doesn’t it? I know I’m looking forward to it. I can only imagine what they gave out that first year in Orlando. We’ll just have to wait and see. 53 days and counting…