Day two was a long day. Sessions all day and a fairly late and long dinner. Have to get to sleep earlier tonight, especially with the night at Islands of Adventure tomorrow.

Yesterday’s focus was mostly Systems Management Server v4…. I mean System Center Configuration Manager 2007. If there was a sure thing at any SCCM session, it was that everyone keeps calling it SMS v4. I understand the idea behind the System Center family brand, but it will be a long time before people get used to calling SMS by its new name.

All of the SCCM sessions were good, all thorough in-depth looks at getting SCCM installed, deployed to clients, and installing software. The addition of Wake On LAN (WOL) functionality alone will be worth the upgrade. The integration of WSUS into SCCM for deploying patches and updates is a welcome move as well. It should make for a more consistent approach to patching and make it easier to manage. We’re still on WSUS v2 in our environment, but plan on moving to v3 when I get back.

Another new feature we plan to make extensive use of is the ability of SCCM to manage Internet clients. We have manay systems that rarely connect to our network, both home systems provided by the school as well as laptops that never come back to the office. Most people don’t have need to use the VPN on a daily basis, so the opportunity to communicate with these systems that would be available with the VPN rarely happens. Unfortunately to manage Internet clients, SCCM has to run in native mode, and to use native mode, I found out today, you need PKI. I’ve avoided setting up a PKI solution internally, but looks like I have to now. Wish Microsoft had provided some other option to get around deploying PKI. Add that to the to-do list.

The Windows Mobile 6 session was a bit of a disappointment. It started late,ended early,and they didn’t go over that many features. Unfortunately, I skipped a session about developing a universal image for loading systems that everyone raved about to attend the WM6 session. They are going to offer it again on Friday morning, so I’ll be able to catch it then.

Had a bit of a scare after lunch. I walked into one of the bathrooms on the main floor and after taking a couple steps into the room, I slipped on a water-covered floor and wound up flat on my back. Ouch! That tile is hard, and I’m still a bit sore. Nothing permanently damaged though that I can tell. I’m thankful I didn’t smack my head on the floor because if I had, I’d have been on my way to the hospital for sure. Afterwards I noticed the big blue signs at the entrance of the bathrooms that warns the floors are slippery. I’d rather they took the money they spent for the signs and used it to keep the floors dry or use a different floor surface that isn’t like ice when it gets wet.

Yesterday I ran into a couple guys from the medical school at the University, so I joined them for dinner last night. We ate at Charley’s Steak House which was a great meal, although a bit pricey. I need to check the travel guidelines, but I think we exceeded the limits by just a tad. If you’re looking for a good steak in Orlando, give this place a try. You won’t be disappointed.

Swag levels are falling, simply because I’ve grabbed most of what I’m going to get this trip. Here’s the list for the day: 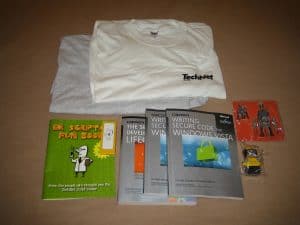