Sigh… Always click save periodically when you’re writing really long posts. I just spent half an hour writing today’s wrap-up when IE crashed on me and I lost everything. Makes me want to scream. Let’s try this again…

The morning keynote was so-so. The intro was funny with Christopher Lloyd appearing as Doc Brown from the Back to the Future movies. The demos were also effective. The middle was weak, however, as someone from Gartner went on and on at a level way higher than was appropriate for an audience of IT Pros and Developers (in my opinion). If I wanted to hear someone from Gartner-speak, I’d go to their conferences. The keynote ran long so I wound up leaving before the end so that I could make it over to the south concourse for the morning sessions. Keynotes always run long, and this one was no exception. Tighten things up next year Microsoft.

The instructor-led labs were all full, so I went to the hands on lab area and worked on a couple of Vista deployment labs. The new dual-monitor setup was a big improvement over last year; no more binders of lab manuals! Plus you can email the lab manual to your email back home right form the lab. You can also save your lab and resume later.

Lunch was pretty good today: chicken and pot roast. The entrance area is a bit of a bottleneck though as people stop at closer buffet lines, leaving the lines at the end wanting for people. Keep moving people! The food is the same no matter where you go.

After lunch, I made a few passes through the Partner Expo, then headed to my first session, +SEC306 A Technical Overview of Microsoft Forefront Client Security+. This session was a good overview of FCS and how it works. We’re planning to switch our systems from Symantec AntiVirus over to FCS. SAV has been a good product, but the management side hasn’t improved in several years. FCS puts it to shame. Plus our pricing under Campus Agreement makes it a no-brainer compared to what we would have to pay this year for SAV.

Next was +CLI332 Microsoft Desktop Optimization Pack: Microsoft SoftGrid Application Virtualization+. Whew, that’s a mouthful. Best session so far. Chad Jones (I think that was his name) had the dual advantage of being able to give a good presentation and having a great product to discuss. The room was packed and people seemed pretty jazzed about SoftGrid. I hadn’t really planned on doing much with it even though we get it as part of the Desktop Optimization Pack, but as I’ve learned more including at today’s session, I’m pretty psyched about how this can really help us in our environment. Definitely moved to the top of my “want to do” list for when I get back home.

The last session of the day was +SEC324 Setup and Deployment of Microsoft Forefront Client Security+. Some overlap with the earlier session, but more focused on deployment (of course). We only have 550 or so computers, so we should be able to get by with a single server setup or as they call it, a “tiny” installation.

At 6 PM, the learning area closed and everyone headed over to the Partner Expo for the reception. Free food and beer and swap is a deadly combination. The food was OK. Finger food and not the healthiest, but chicken tenders, crab cakes, and various other items were enough to be dinner. they even had small hamburgers labeled as “White Castles” but these definitely weren’t authentic sliders. Fo one thing the patties weren’t square, didn’t have holes, and didn’t taste like White Castles. But I give them points for trying.

Picked up a fair amount of swag, so here’s the swag tally for the day along with a photo to close things out for the day: 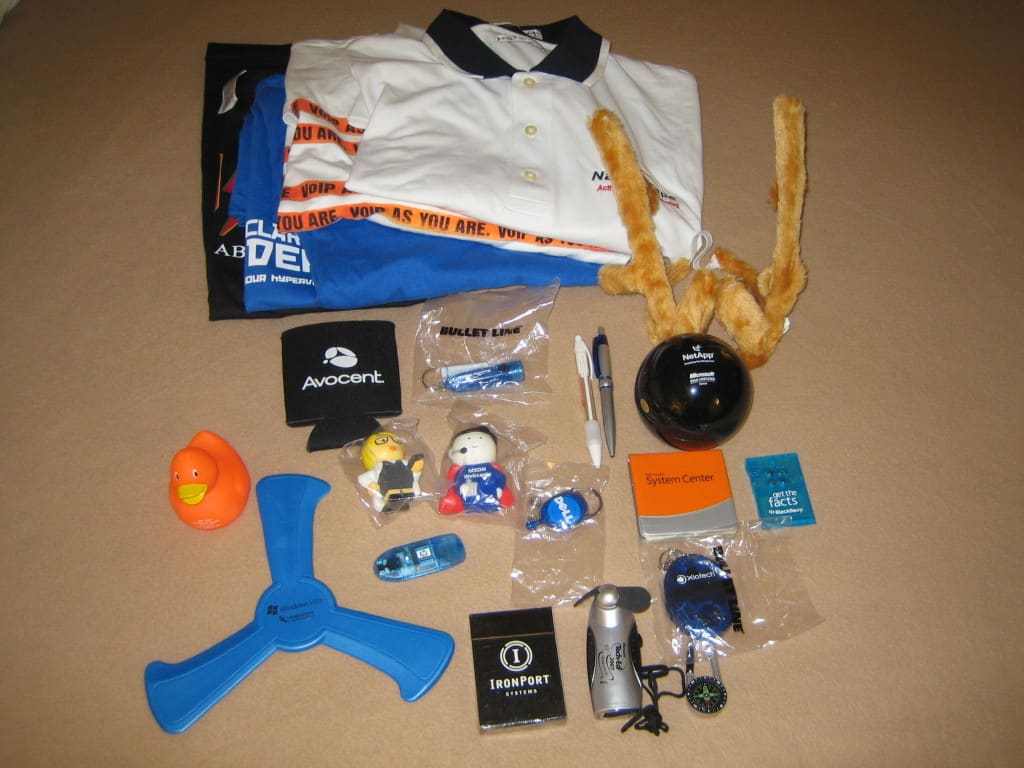