Day one of TechEd started off with some logistical problems. Apparently there were difficulties with the buses. Some buses arrived late, others arrived full, others didn’t know the way to the convention center. I read on the attendee discussions page that the bus ride one of the hotels farther out took an hour! Hopefully things will be better tomorrow.

Meals were OK. Neither breakfast nor lunch were spectacular, but not bad for convention food. Amazingly enough the Dining Gestapo isn’t present this year. At previous TechEd shows, if you dared to sit down at any table other than the one to which they led you, watch out. Curious if this is due to feedback from attendees, or whether they have enough tables that they don’t care if people don’t fill up each one.

MGT401: We’ve deployed MOM on a few of our servers, but haven’t done much custom rule development. This session showed some ways you can use MOM and the Event Logs to provide alerts when things like group memberships change. A lot of useful information, including a reference to a third party management pack to do this kind of monitoring. I’ll have to check that out.

OFC201: I haven’t tried out the Office 2007 Beta yet due to a lack of time to dedicate to putting it through its paces. So this session was the first time I’ve been able to see the interface live. Quite impressive. I’ve been concerned about the transition and end user disruption, but I’m feeling more comfortable about it now. Looks like Microsoft has put a lot of thought into the new Office interface along with millions of data points from real-life use. great job guys!

MSG205: This session was a quick intro to Exchange 2007. They showed a quick look at different features and provided info directing us to other sessions that cover them in more detail. there are so many sessions about Exchange, it seems just like the old days of MEC. A highlight of the demos was one for Unified Messaging where the presenter used the voice response system to have the system call his wife. She was a good sport about being used in a demo in front of hundreds of people as well as a webcast audience. Impressive features as well. The Unified Messaging looks useful, but in our environment the phone system is a central service, one over which we have no control. So there really isn’t a way to implement something like this, at least for now.

MSG307: Best session so far. Steve from HP has given similar presentations on sizing Exchange systems and like the others, he did not disappoint. He takes material that is quite technical and somewhat dry at first glance and presents it in such a way that you’re entertained while you’re learning. And there was a lot to learn. Exchange 2007 really changes the rules for sizing servers due to major IO reductions in the new system coupled with the move to 64-bit.

MGT204: This session was a bit dry. It is hard to get excited about SMS and its follow-on, SCCM, but it was a good overview of the major changes that coming. The software is only at beta 1 (with a refresh in the process of being finished now) so some features may still change, but it looks like some solid improvements in the way the system works. Some of it is just the integration of existing feature packs, but there’s more to it than that. The idea of task sequences are one new feature. Basically these are ways to script operations within SMS, I mean SCCM.

After sessions ended for the day, it was down to the Expo floor for the Expo Reception. An evening of free drinks and free appetizer food. They were offering chicken skewers, reuben sandwiches (they skimped on sauerkraut), sausage skewers, caesar salad wraps, pasta, veggie calzones, mini shrimp cocktail (tasty, but you had to eat a dozen to get any quantity of the tiny shrimp that were drowning in cocktail sauce), and several desserts.

I picked up a bunch of swag, stuffing my bag full as well as an additional vendor bag. First day is always the biggest. I’ll update my swag tally later. Unfortunately I lost the pen that came with our bag at registration. The pen was so-so, but one end could be used as a stylus and was pretty useful. At some point during the reception, I must have put it back and missed securing it to the pen holder on the badge. Oh well.

Here are some photos from the reception: 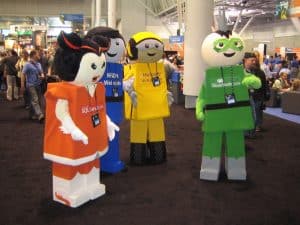 These were characters walking around that are some kind of Microsoft Lego-like Superhero. The Technet people are giving away a different foam toy of these characters each day. 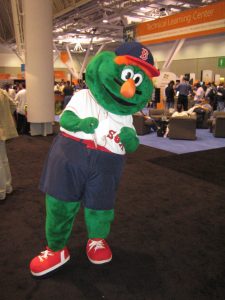 Wally the Green Monster is the mascot for the Boston Red Sox.