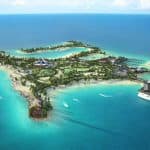 The opening date for Ocean Cay MSC Ocean Reserve, the new private island under development by MSC Cruises, has been pushed back for a second time to late fall 2019 according to tweets from the official MSC Cruises (USA) account (@MSCCruisesUSA). Originally scheduled to open in December 2017, MSC announced in September 2016 that the
Read More