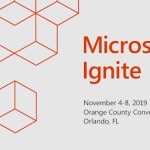 Early registration for Microsoft Ignite 2019 opened on May 21 for anyone who had pre-registered for Ignite. In years past I would have been logged in and registered within five minutes of hearing the news. This year, however, I didn’t register until late in in the day on the 23rd. Whey the delay? I’m being
Read More 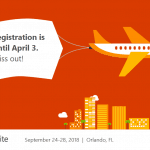 Early registration for Microsoft Ignite 2018 opened today at 9 AM Pacific. If you preregistered for Ignite, you should have received an email today from Microsoft inviting you to register for Ignite. If you did not see the email, don’t worry, you don’t need any codes or special links. Just head over to the registration
Read More 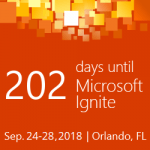 Microsoft sent an email today to people who pre-registered for Microsoft Ignite containing the first details about the September event.  Here we go… Registration Dates If you pre-registered for Ignite, you can register starting March 27 according to the email. Yesterday @MS_Ignite tweeted that it would open on March 20, but I am going to
Read More

General registration opened for Microsoft Ignite yesterday, and as expected, several additional hotels are now unavailable. I have updated the (unofficial) Microsoft Ignite 2017 Hotels list to remove seven hotels. Before I get to the changes, a reminder as to what I mean when I say a hotel is unavailable. “Unavailable” means the hotel no
Read More

Teams The word “soon” can have varied meanings, but in terms of Microsoft Teams, it means one week. After becoming generally available for Business customers on March 14, Microsoft announced the availability of Teams for Education customers yesterday on March 21. The announcement was made on a post on the Microsoft Teams blog: Last week, Microsoft Teams
Read More