System Center 2012 Service Pack 1 (SP1) hit the Volume Licensing Service Center site (VLSC) yesterday.  I had heard that it was going to hit on January 3, so I made a note to check a day or two before to see if it went up early.  I completely forgot about it on New Year’s (thanks to the Rose Bowl… my poor Badgers…), and it only crossed my mind on my way back from lunch today. When I logged on to VLSC, there it was, SP1 in all its “OK to use in production” goodness.

Before I started downloading though, I tweeted that it was available. It was about on the same level as calling “First!” on an online article, but what can I say?  Sometimes it is the little things that get you through the day. 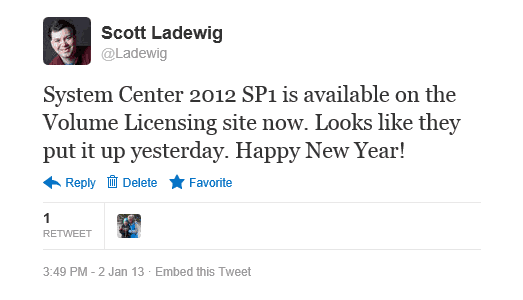 Did you notice the retweet count? One. Yep, one person RTd that tweet. Thank you Fredrik Nilsson. Glad to know at least one person who is not a family member pays attention.

Anyway….  With the social media obligation out of the way, it was time to download. Speaking of downloading, when you’re looking at several GB of downloads, you really appreciate the kind of bandwidth you get at a university.  So many people today have faster Internet connections at home as compared to work. Not when you work at a major research university. Thank you WUSTL!

Back to SP1, I expected more of a response, but there really wasn’t much reaction. Rod Trent blogged/tweeted it a few minutes after I did, and then Johan Arwidmark about 15 minutes after that.  I guess most people were content with their MSDN or TechNet downloads even those are only supposed to be for labs and testing. I have a DPM server I need to set up pretty quickly, so the VLCS download is the one I was waiting for anxiously (along with the product keys). I’m pretty particular about what I install, so no “crossing the streams” so to speak.

Now that I have SP1, I can finally upgrade from DPM 2010 to 2012 and be able to protect Server 2012 systems. And that means I can FINALLY replace my ancient Storage Server 2003 cluster. Hallelujah!  Lots of fun to keep me busy over Winter Break.  If you want to have fun too, go and download System Center 2012 SP1!