Neil Gaiman’s Stardust is one of my favorite stories.  The film version is a lovely fairy tale with an amazing soundtrack, and it makes me feel good whenever I watch it.  The book is quite different, much darker and more adult.  I love them both however. So when I saw that a new hardcover edition was being released (Stardust: The Gift Edition), I placed my order on Amazon and waited for it to arrive.

It arrived today, and after I opened the package, I sent this tweet:

EBooks are great but some books were meant to be held in hand like this brand new edition of Stardust by @neilhimself twitter.com/Ladewig/status…

And then this happened: 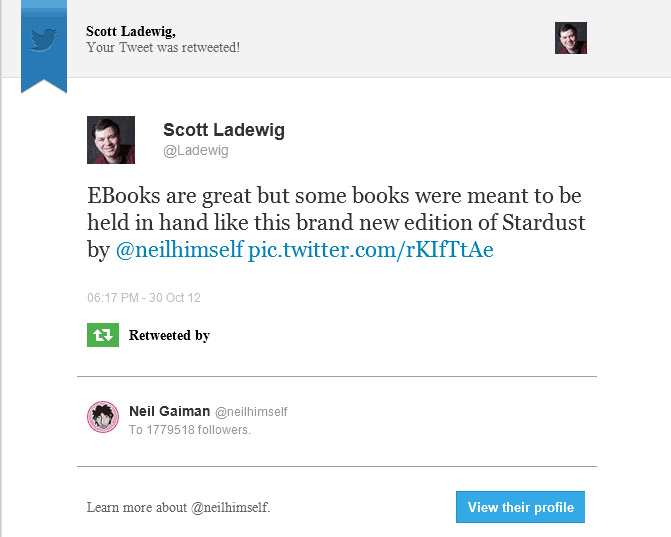 It may not mean much to the average person, but to get an RT from Neil Gaiman for something I said is pretty much like getting a big bag of awesome for Christmas.

And then my phone started to chirp. When your tweet gets sent out to 1.7+ million people, a few are bound to respond. So far 50+ RTs and a similar number of favorites.  It doesn’t really mean much, but it made for a fun, albeit noisy, evening. Yes, I could have turned off the alerts, but it was more fun leaving then on.  Like a little Twitter slot machine that hit three bars.

So last night was fun, but today it is back to Twitter obscurity. And peace and quiet.