Good intentions rarely lead to blog posts.  At least that’s how it works out for me when I go on a trip. Look back through my blog and you’ll see examples of everywhere. TechEd posts that peter out mid-week. Swag round-ups that are weeks or months late. Some conferences don’t even merit a mention. I need to get better at writing consistently, if for no other reason than to make it a habit and not a challenge every time. 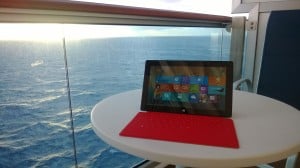 So in that spirit, I’m click clacking away on my Surface RT while I sit on the balcony of my cabin on Princess Cruises’ Royal Princess as she sails away from Princess Cays. (Note: I was on the ship when I started this post, but I’m firmly on land now as I finally get around to posting it.) I’m on the first day of the 5 day Inaugural Caribbean sailing for Royal Princess.  But I’m getting ahead of myself. I should probably jump back a few days and give a quick run-down of what I’ve been up to.   If you follow me on Twitter or on Facebook, most of this is a repeat, but getting it up on the blog means it gets indexed, so someone might find this in the weeks and months ahead.

We booked this cruise over 500 days ago.  Maiden voyages don’t come around very often, and even though this isn’t her very first voyage, being on the first Caribbean cruise on Royal Princess sounded like fun.  We’ve been sailing on Princess for years and have sampled a number of the ships in the fleet. Royal Princess is the first, however, of a two-ship (for now) class of ship, the largest ever for Princess Cruises.  One unusual aspect of this cruise is that it’s only 5 days long.  Because of the flight expenses to get to a port, cruises under seven days aren’t all that attractive, but this was an exception.

Royal Princess will be sailing seven-day cruises after this cruise, but this cruise lost two days to a cruise to nowhere for travel agents and news media to celebrate Royal Princess’ arrival in the.  We decided to make a full week out of it by spending the rest of the trip in Fort Lauderdale, her home port.  We’ve sailed out of Fort Lauderdale on other cruises, but we’ve always flown in, stayed a night, and then sailed the next day.

We stayed at the Riverside Hotel on Las Olas Boulevard.  The Riverside is an older hotel, dating back to the 1930’s, but they’ve expanded the hotel considerably since then, and we booked a room in the recently-renovated tower.  Las Olas Boulevard is one of the main streets in Fort Lauderdale (or Fort Liquordale as the clerk at the hotel referred to it), and it runs from downtown all the way to the beaches.  The attraction for us were the many restaurants and shops along the boulevard.

On the opposite side of the hotel from Las Olas is the New River which runs into the Intracoastal Waterway and the water taxi service.  A regular taxi may get you where you’re going more quickly, but the water taxi combines transportation with a scenic tour at a flat rate per-day.  Adults are $20 and after 4 PM, the price drops to $13.  We found a great deal online, however, and paid $20 each day for both of us.

One thing we hadn’t counted on when planning to use the water taxi, however, was the Fort Lauderdale International Boat Show which was going to take place on the following weekend. This boat show is the largest on-water boat show in the world, and approximately $4 billion (yes, billion with a “b”) worth of yachts and cabin cruisers make their way to Fort Lauderdale.  Some of these yachts are over 200 ft. long, and moving them into place can be a slow and laborious process.  It also means the Coast Guard will sometimes close the Intracoastal, leaving the water taxi stuck waiting for the yachts to complete their movements.  It wasn’t too bad for us as we only had to come up with alternate transportation one day, but you definitely want to consider this if you’re in Fort Lauderdale on that weekend.

The first night there, we met up with some of our cruise & Twitter friends for dinner at Big City Tavern —  Simon Duvall (@SimonTravels), Doug Parker (@CruiseRadio), and Jason Coleman (@jasoncolemaninc).  Doug and Jason were in town for the Royal Princess preview and Simon lives in the area. It was a great chance to catch up, and I even learned that there are people who actually remember that terrible TV show, “Love Boat: The Next Wave”, and who actually prefer it to the original. Whatever…. 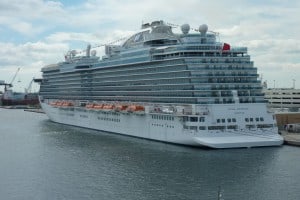 The next day (Sunday) we hopped the water taxi and headed down to Port Everglades to see Royal Princess. She had arrived early that morning after her transatlantic cruise. The 17th Street Bridge is a great place to check out any Princess ships in port since Terminal 2 sits right next to the bridge. There are two platforms on each side with benches, Wear a hat, though, as there is absolutely no shade.

Afterwards we made our way over to the southern end of the beach to watch the cruise ships leave Port Everglades. If I’m at my computer when the ships leave on the weekend, I’ll often check it out on the Port Everglades webcam, but this was finally a chance to see it live. If you want to do the same and are on foot, the public beach access closest to the channel is at Anchor Drive and South Ocean Ln, right across the street from Point of Americas Condominiums.

An ever better place to watch the ships leave is at John U. Lloyd State Park which is on the south side of the channel. Unfortunately, you really need to have a car to get there, so this wasn’t an easy option for us.

We found a semi-comfy place to sit on the rocks on the channel and watched as Eurodam, Allure of the Seas, and Carnival Freedom all left port. Unfortunately we weren’t able to watch Royal Princess leave as she wasn’t scheduled to head out until 10:30 pm. 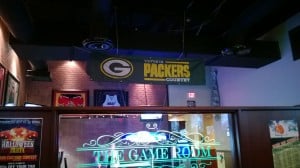 That night we cabbed it over to Slackers Bar and Grill, the local Green Bay Packers Bar. It was in a strip mall, but the Packers flags outside made it pretty easy to find. Once inside, it felt like I was back home in Wisconsin. The place was packed and nearly everyone there was wearing green and gold. It was awesome. Normally they do show other games (although if a Packers game is on, that’s the only one with sound), but since this was the Sunday night game, every screen was turned to our game. The Packers went on to beat the Vikings convincingly, so it was a great evening. (Little did we know this would be the last win for a while). 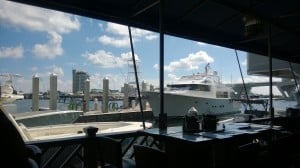 Monday was our last full day in town, so we slept in and eventually made our way via the water taxi to 15th Street Fisheries. The restaurant sits right on the water and was a lovely place to sit outside and enjoy the gorgeous weather and watch the boats go by.  Everything we ate was quite good and fairly priced. I’d definitely go back.

After lunch we continued on the water taxi up to the beach end of Las Olas Boulevard and took a short walk along that end of the beach before heading back to the hotel. Since we had to repack for the cruise, we stayed in and had a light dinner at the Indigo Restaurant in the hotel.

I’ve probably rambled enough (or more than enough) for one post, so I’ll draw things to a close here and leave my rundown of the cruise for next time.