I don’t normally blog about recipes. In fact, I don’t think I’ve ever posted a recipe of any kind.  I recently adapted a recipe for a recent Packers game, however, that was a big hit at home, so I thought I’d share.

If you want the story, keep reading, otherwise you can skip to the recipe.

Last month, I traveled to New Orleans for the Packers game against the Saints. As you may recall, I didn’t actually go to the game, but instead watched the game at a friend’s house.  I met Gerald Duhon on Twitter, and have long drooled over the delicious dishes he cooks every week for what he hashtags #SaintsCooking. Gerald was kind of enough to invite me over, and it was as fun and tasty as I had hoped.

One of the dishes he made that night was something called Breesy Beefy Mac. It’s basically macaroni and cheese with beef added, and is named after the Saints quarterback, Drew Brees, apparently as an homage to part of his regular meal the night before  game.

When I was putting together the menu for the Packers game against the Bears, I decided to give Breesy Beefy Mac a try, and looked online for a recipe. The one I found was on the Times-Picayune website. It was by Emily Dilport, the chef de cuisine at M Bistro at the time. (Her LinkedIn profile says she’s now the Senior Banquet Chef at the RItz-Carlton in Aruba.), and is an item that they added to their weekly tailgate menu in 2011. I also found a revised edition sans cheese (apparently Drew doesn’t care for cheese) in 2012.   Being a fine son of Wisconsin, there was no way I was going to use a recipe that omitted cheese, so I used the original version as my launching point.

Chef Dilport’s recipe calls for a mix of ground beef (1 1/2 lbs) and andouille (1 cup).  I love andouille, but seeing as this was to be served in a Packers home for a Packers game, I swapped the andouille out for bratwurst. I used Klement’s, but Usinger’s or any other good Wisconsin brat will do (I won’t say anything if you go with a non-Wisconsin brat as long as it’s the traditional flavor). I also flipped the ratio to use 1 lb of bratwurst to 1/2 pound of ground beef.

If more sausage is good, then more cheese is even better.  I doubled the amount of cheese used, making sure to use only cheese from… you guessed it, Wisconsin. The only other change I made was to double the amount of pasta used.  You can’t have mac and cheese without the “mac” and the original was a bit skimpy in that area.

Given the substantial Wisconsin flavor of the new recipe, I decided to call it… Sconnie Mac! (Despite the similar sounding name, I can assure you that this dish has nothing to do with Connie Mack.).  I’ve provided the recipe below along with links to both versions of the original inspiration — Breesy Beefy Mac — on the T-P website (version 1 with cheese, version 2 without cheese). Enjoy! 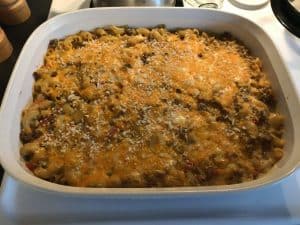