I normally provide an annual update on my quest for Green Bay Packers season tickets, but I missed last year. My blogging activity dried up while I worked on moving my site to a new site. More on that later, but here’s a combined update for 2016 and 2017.

For those who don’t know, Lambeau Field has been sold out on a season ticket basis since 1960. That’s when the current waiting list was started. The last time I saw a report of the length of the list (2015), it was over 123,000. Unfortunately for me, my parents never imagined owning season tickets, so they never joined the list, nor did they add me. I finally joined the list in 2004, but this was much too late.

How late? Here is this year’s postcard from the Packers informing me of my spot in line. 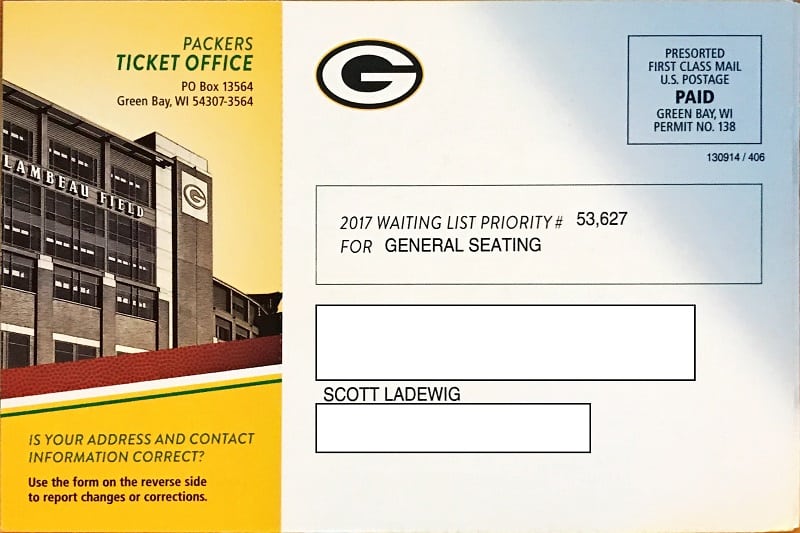 That means there are 53,626 people in front of me. It also means there are ~70,000 people behind me, so it could be worse. You can see my progress over the years in the graph below. I have the vertical axis going all the way to zero so you get a sense for just how far away I am.

My average movement over this time has been 924 spots per year. That’s not great, and it is actually worse because there was a one-time bump in 2013 when the Packers added new seating. Since then my average movement has been 417 each year. Given that I’m nearly 50, this doesn’t bode well for me ever owning tickets.

There is only one scenario that sees me sitting in my own seat at Lambeau in the near future. An 18-game season. If the league extends the season from 16 games to 18, each team adds one home game to the schedule. Rather than offer the game to current Green and Gold package season ticket holders, the Packers could offer a single-game package to the waiting list. I imagine a fair number would go for a shot at one game per year if offered. Going to one game every year is better than not going to any, and it would be less expensive. The team would probably be able to clear a large chunk of the list that way.  And I could finally add “Packers season ticket holder” alongside “Packers shareholder” to my online bio.

Stay tuned and see where I wind up next year. If you want to add yourself or your kids to the line, send in the form on the Packers website and start your own countdown to season tickets!