Alas, all good things must come to an end as they say.  And TechEd is no exception. Friday morning is usually the great exodus of IT Pros and Devs with airports full of thousands of people all carrying the same backpack. A few people stay on to take care of other business or enjoy an extended vacation.

This year, there was an extra reason to stay in town, a mysterious 5th day of TechEd, sort of. The Houston Area System Management User group sponsored a day of sessions focused on System Center to help fill the gap that the MMS contingent felt was missing from TechEd 2014. The event was announced too late for me to change plans, but it sounded like a worthwhile day. Since TechEd is likely to continue on the 4 day format that it shifted to several years ago, this Day 5 event sounds like a good tradition to begin. For more information, check out the TechNet blog post about the event.

Since Day 5 wasn’t on my agenda, I checked out of my hotel and had breakfast with agent P and Adam Fowler at the Hilton. I ate, said good bye, and headed to Hobby Airport where I spent the rest of the day. Southwest was overbooked on most flights to St. Louis, so I gave up my seat in exchange for a $500 voucher (cha-ching) and almost scored another on my next flight. Unfortunately they had some no-shows so I only walked away with the one voucher, but that’s still a great deal. 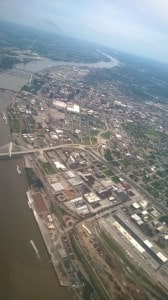 The great thing about volunteering to get bumped leaving home form TechEd is the airport is full of friends passing through all day. I hung out with Chris Noyes and had an early dinner with him and John Flores where we laughed about the Emory Windows deployment nightmare only because it wasn’t happening to us) and learned about the big quilting convention in Houston every year as well as what goes into producing potatoes for French fries (the latter two thanks to the people at the next table). I even chatted with Mark Russinovich briefly, had a conversation with fellow attendees about their TechEd experience love getting feedback that I can take back to the TechEd Roundtable), and caught up with Ron Indeck, President and CTO of Velocidata and my old EE professor way back in the day. If you have to be stuck in an airport, this was the right way to do it.

I’m always sad to see TechEd end. I look forward to it all year long, and when it gets here, it goes by much too fast. I know people have mixed feelings about the event (especially some of the MMS alumni), but it’s very special to me. Whenever I arrive in whichever city is hosting that year, it feels like I’m coming home. The people I’ve met over the years and with whom I reunite every year aren’t just professional contacts. Most are friends, and some feel like family.

So I will be sad for a while because it’s over, but I’ll start to get excited again very soon as my attention turns to planning for 2015. This post ends my day-by-day diary of the week. I do still want to put together an acknowledgement of the folks I met this year, but it may be a few days before that goes up. Did I mention I’m at Walt Disney World as I write this? No? Well I am, so I’m sure you will understand that I can’t put off the Disney magic any longer. Bye for now…