I’m just going to say that Tuesday, day two of TechEd, was one incredible day. It started rainy and ended rainy, but in-between it had a number of highlights.

First up was the session – DCIM-B412 Effortless Migration from VMware to Windows Server 2012 R2 Hyper-V (watch the session recording). Maarten Goert and Marc van Eijk were the speakers, and they walked us through a number of tools that you can use to migrate VMs from VMware to Hyper-V. I’m getting ready to start making that move, so this was obvious interest.  They covered six options including tools from Microsoft as well as 3rd-party solutions (MS VM Converter, SC VMM, Netapp SHIFT, Double Take Move, Platespin Migrate, Migration Automation Toolkit). I didn’t pay that much attention to the 3rd party tools since I don’t have budget for any of them, but the NetApp SHIFT is one that I did watch simply because the migration is so fast.  I’ve watched a demo of it before, and it’s impressive every time I see it. I don’t have any NetApp storage (even though the brother of my college roommate and best man at my wedding is one of the founders), so I can’t make use of it. It does almost make you want to go get NetApp just to do the migration. For me, only having to move ~20 VMs, MVMC should be enough.

After a short break, I was off to another session – DCIM-B309 Bare Metal OS Deployment in Microsoft System Center 2012 R2 Virtual Machine Manager: This Is How It Is Done! (watch the session recording). Mikael Nystrom was the presenter, and he’s on my shortlist of favorite speakers. He’s always entertaining and even more informative. I just worked through the bare metal deployment process over the last few weeks, so this was a chance to see what kind of things I did wrong. Right off the bat he offered a tip that hadn’t occurred to me. He suggested using a full UI server image to work out the bugs in your deployment. Then once you get it working smoothly, you switch out the image for Core. I can only imagine how much time I might have saved if I had thought of this. He also covered the issues you will run into when trying to define teams in your hardware definition. Again, I could have saved a lot of time had I been able to watch this session. I can’t cover everything here, but if you have any interest in bare metal deployment of Hyper-V, definitely watch the recording. 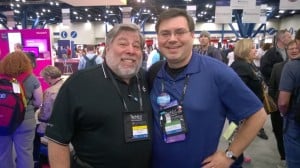 I skipped the next session timeslot in order to stop by the Fusion-io booth for their prize drawing. I don’t normally participate in drawings that require me to be back at a certain time. My time is pretty valuable to me, and I would hate to not show up and find out later that my name was drawn. I did stop by Fusion-io, however, because the drawing was for a chance to bowl with Steve Wozniak (yes, that Steve Wozniak) and he was going to be there to draw the winner. I didn’t win, but I did get my picture taken with him and had a chance to say hi. You don’t get too many chances to meet a living legend like that. Definitely a highlight of the week.

Afterwards, I was off to see my friend Phoummala Schmitt  (you may know her online as Exchange Goddess) present at the CommVault booth. She did a great job talking about how her company, Harsco, uses CommVault to backup systems all over the globe. I only have to deal with systems in my computer room, let alone on another continent, so it was interesting to see how all of that could be managed from a single pane. Nice job Phoummala!

Next I headed back to sessions, and I finally had a chance to meet Jose Barreto.  Jose’s blog has been a huge help for me as I’ve been setting up new Hyper-V and Scale Out File Server clusters.  Server 2012 and 2012 R2 have made incredible advancements in storage, and Jose is a key part of that.  His session was DCIM-B337 File Server Networking for a Private Cloud Storage Infrastructure in Windows Server 2012 R2 (watch session recording). Definitely a good session to watch for the latest info on RDMA, SMB 3.0, Multichannel SMB, and all those goodies that make it possible to do virtualization without a SAN.

I skipped the last session of the day to go to the Petri IT Knowledgebase Author Meet and Greet. In addition to seeing Phoummala again (she writes for Petri). Also there were Jeff Hicks, Peter De Tender, Aidan Finn,  J. Peter Bruzzese, and Jeff James to name a few.  It was great to have the chance to meet all of these people, nearly all of whom I’ve been reading or following online for some time. I’m going to close out my TechEd blog posts with one where I acknowledge as many of the amazing people that I had the chance to meet this week. Keep an eye out of that one, because it’ll be a list of people you’ll want to start following online if you don’t already.

I didn’t realize at the time, but I wasn’t attending only the meet and greet. I hung around for a while as people left, and had planned to head over to House of Blues before going to the MMS Alumni party at Aquarium. Instead I crashed the authors dinner. As I was standing there, they said the table was ready and people were heading over to sit down for dinner. I wasn’t sure what to do but was assured it was OK and I was invited to dine with the group.  I want to give a big thank you to Petri IT for their gracious hospitality. 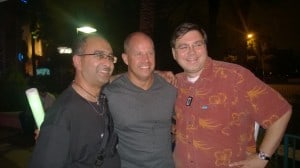 After dinner, I grabbed a taxi and headed to Aquarium for the MMS Alumni party. I arrived a bit late after things were in full swing due to my impromptu dinner. Joey Snow was killing it up on stage as he always does, food and drinks were everywhere, and the Canadians were riding a train (don’t ask).  Harjit Dhaliwal and I had been talking about getting a selfie with Brad Anderson, Corporate VP for Cloud & Enterprise, all week, and we had learned that he was going to be at the party.  We couldn’t get into the VIP area upstairs, so we weren’t sure if it was going to happen, but while we were standing by the dance floor, lo and behold, Brad walked up. We grabbed our chance, scored the photo, and had a few minutes to talk with him. Then he was off to say a few words to the folks on the dance floor and then move on.  I saw him later talking to other party goers and posing for photos, and I thought it was a great of him to make himself available at the party. Everyone seemed to appreciate that.

As we came closer to the end of the party, it started to rain and then it poured.  We took cover from the rain, obtained the rain ponchos that were being handed out, and made our way back over to the dance floor where folks had continued to dance, even in the pouring rain. That’s the kind of effect DJ Joey Snow has on people. They just won’t stop dancing! Eventually they had to stop, however, as the party did have to end.  I walked back with friends in the rain, a rather cold rain, before finally getting back to the hotel.

That was it for day two. I wonder what day three will bring? Stay tuned.