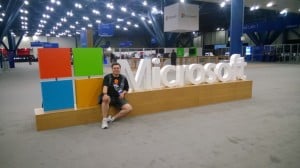 Can you believe we’re already at Wednesday, Day Three? The day started bright and early at the conference center boardroom for breakfast with the TechEd Roundtable. What’s the Roundtable? The short version is it is an advisory group of attendees of both TechEd and MMS.  For more detailed information about the Roundtable and what happened when we last met in December, see my post, TechEd 2014 Roundtable Follow-Up.

The breakfast was a good opportunity to review what we thought were hits and misses of the conference up to that point.  There weren’t a lot of misses, and I think we all felt that much of the feedback we provided in the months leading up to Houston was reflected in the final event. Not all of it, and I’m sure we’ll have new ideas and suggestions that will bubble up in the conversation. There’s always room to improve. The Roundtable will be back for TechEd 2015, and I hope to be back for another shot at it this year.  We did some great stuff in 2014 and I know 2015 we can do even more.  Stay tuned. 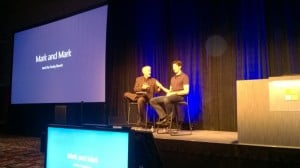 After breakfast, it was off to the alumni lounge to work on a blog post (or at least stared at the unfinished blog post while I sipped a Diet Dr. Pepper), before heading to my first session.  The Two Marks — Mark Russinovich and Mark Minasi — were drawing a crowd for DCIM-B386 Mark Russinovich and Mark Minasi on Cloud Computing (watch the session recording). This session wasn’t your typical PowerPoint and demos, this was an interview of Russinovich by Minasi. As you can expect, any time you put these two together, it makes for an entertaining session. One of the early questions dealt with other cloud providers, and it became quickly apparent that Microsoft sees itself as one of only three cloud providers (Google and Amazon are the other two) that are in it for the long haul. I think they’re right, when you look at the breadth and depth of the product and the resources behind it. Microsoft is not screwing around in this area, and while there may be room for smaller, boutique providers now, Mark R. said their days are probably numbered. I think the session would have been better if we could have submitted questions in advance.  Mark Minasi quizzed the crowd briefly to ask what we wanted to hear before the session began, but I only recall one comment/ question that was incorporated into the discussion.

My next session was DCIM-B342 Windows To Go: Deployment, Support for BYOD, and What IT Pros Need to Know (watch session recording). This was a general overview of the state of Windows To Go today. One of the presenters brought only a WTG stick with him to TechEd to demonstrate that it’s a viable alternative to a laptop. Unfortunately it’s only viable if you can find a PC to boot form the stick. Might be good at the convention center, but it’s going to be pretty hard to find a laptop to use on the flight over. I’ve been considering WTG as an option for a virtual lab to replace the computer lab that we’ll be shutting down this summer. We’re also looking to expand out use of Remote Desktop, and things like Azure RemoteApp are interesting as well. For us, licensing will probably be what drives the mix of different ways to deliver the apps to students. Add yet another item to the to-do list.

Next stop, DCIM-B418 Windows PowerShell Best Practices and Patters: Time to Get Serious (watch session recording) with Don Jones. I’ve made an effort over the last year to use PowerShell more than I had before, and this session was a great checkpoint. Don always has top rated sessions, and this one is right up there.  Don’s message was taking your use of PowerShell to the next level and treating it seriously, focusing on maintainability and reliability. Your scripts aren’t very useful if they don’t work, or if you can’t read them. Watch this session, and work on making these practices part of your scripting routine. I know I need to work better on these (version control anyone?). 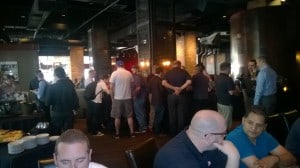 With sessions done for the day, it was time to shift my attention to the evening networking events. This TechEd seems to have had many more parties each night, and Wednesday was no exception. I managed to hit four parties that night, starting with the always popular UC Roundtable that Jeff Guillet organizes each year. The roundtable was at Sambuca this year, and as always the food is great. A big thank you to F5 for sponsoring the roundtable again. That being said, I do miss the informal nature of my first UC Roundtable at the Rusty Nail in New Orleans in 2010. That event was pretty bare bones, but it set the stage for some great conversation with the product team. I wouldn’t mind a return to that format.

After the Roundtable it was off to the Springboard party at Hughes Hangar. I wish I could have stayed longer, but we had a schedule to meet! Best part of going was finally having a chance to meet Ben Hunter in person.  I think he’s done a great job in the transition of Springboard from Stephen Rose. Springboard puts out great information every month in the Springboard Series newsletter, so if you’re responsible for Windows Client in your organization, make sure you subscribe.

For party no. 3, we decided to complicate things and split up. I went to the Thycotic party at Okra while the others headed to Flying Saucer for a TechEd equivalent of vBeers. They called it mBeers, but since vBeers is hypervisor-neutral, I don’t think a new name was necessary. A little “v” does not always equal VMware.

Splitting up turned out to be a bad idea when the others headed off to the next party, ENow’s Scheduled Maintenance, and left me at Okra. Turns out they picked up additional people, forgetting that they still needed to come get me. Of course that meant there was no space left in the car, so I was on my own to get there. After much grumbling and a lot of walking to find a cab, I finally made it. It wouldn’t have been so bad, but when we split up, I specifically said “Now, don’t forget about me.” (Simple Minds anyone?) Ouch. I somehow managed to carry on despite the deep emotional wound (too much?). OK, maybe it was just a bruise. 🙂

I think Scheduled Maintenance at MEC was a better event than the TechEd edition. The venue in Houston was too far off the beaten path, and there seemed to be fewer people than attended at MEC. Still enjoyable, mind you, but MEC was a difficult party to top. Then it was back to the Hilton lounge, and that’s when I called it a night.

All in all, it was a good evening, but next year, I’m definitely going to be more selective with the evening events. I’d rather spend more time at fewer events, and not feel so rushed. Of course, I say this now, but come next year, I’ll probably wind up doing it all over again.

Only one day left. Come back tomorrow (hopefully) for the Teched day four.