We wait all year for TechEd to get here, and when the time draws near to travel to the host city, the excitement is palpable. That’s how it is for me at least. And then in the blink of an eye, it’s over.  So here we are, in just such a blink, at day four, the last day of TechEd.

My theme this year has been fewer sessions and more interaction, and that continued for the final day.  The first session I attended was WIN-B358 Real-World Windows 8.1 Deployment Notes from the Field (watch the session recording) with Johan Arwidmark. I’ve been using MDT since it was called BDD 2007, but every time I see Johan speak, I learn something new. As he said during the intro, he gets to find and deal with many of the gotchas and issues with client deployment so that the rest of us can spend more time doing and less time fixing.  Having said that, we’re always going to run into something that trips us up. When that happens you want to find out in your lab and not in production. A system with 16 GB RAM and an SSD is all you need for an effective deployment lab. Pair that with the hydration kit on DeploymentResearch.com, and you can have a lab setup in no time.

One of the new tips I picked up this time has to do with logging in MDT. If you enable monitoring in MDT (and why wouldn’t you) and you have a Temp folder on C:, the monitor service starts logging there by default and it’s pretty verbose. Johan advises that you change the settings to only log error or warnings and to move the file off of C: to avoid space issues. There is a blog post that covers this fix in detail. There were other takeaways, but you should watch and see what is new for you. Just remember, whenever you’re working on deployments, always ask yourself “What would Johan do?” and then do the same.

I spent some time in the alumni lounge waiting for the Tech Expo hall to open before meeting up with one of my partners in crime for the week. Let’s call her Agent P. As soon as the Expo opened it was a quick dash over to Splunk’s booth because they finally had t-shirts back in stock. I was prepared to be disappointed when asked for an XL Canada shirt, but — miracle of miracles — they had it! If you haven’t seen the shirt before, it says “Because you can’t always blame Canada” on the front. I’ve been trying for years, literally years, to get that shirt, and it’s finally mine! Guess it was my lucky day.

It was getting close to the start of the live Patch and Switch show over at Channel 9, so we headed in that direction, making a stop along the way to see Veronica Wei Sopher at Microsoft Learning. Who doesn’t love Veronica? She’s the face of Microsoft Learning and certifications for most of us, and I definitely did not get to hang out with her enough this year. I need to plan a trip to Redmond to see her (and a bunch of other people). 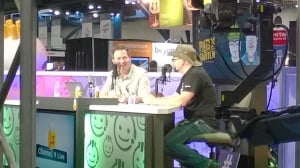 When we arrived at the Channel 9 stage, a crowd had already gathered and Rick and Joey were getting ready to go on the air. We startled Rick a bit on our arrival as Veronica nearly collided with the stage. The setup is sturdier than it looks, however, so no damage was done to either the stage or Veronica.

Patch and Switch are the alter egos of Rick Claus and Joey Snow who have a biweekly podcast. It’s a fun 45 minutes spent with friends talking about everything from the latest hardware to doing IT support for friends and family to earn beer money. People call in or participate in the chat room. This episode of the Patch and Switch Show was a special one because it was the first one done in front of a live audience. And it did not disappoint. As one might expect, things quickly went off the rails and the craziness was definitely at a higher level with people photo bombing (video bombing?) the stage, doing the wave, and other shenanigans.  If you’re ready to have a laugh with the guys, watch the recording on Channel 9. 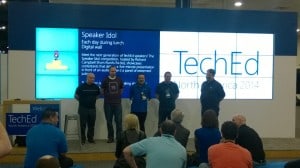 After an unsuccessful search for lunch (the conference center food looked especially unappetizing that day), we watched the Speaker Idol finals and threw our support behind Aidan Finn as he and the other contestants competed for a speaker slot at TechEd 2015.Aidan knocked it out of the park.  The judges found a few minor things to mention as areas for improvement, but it was obvious they were really hunting to find things. When they announced Aidan as the winner, I think the only person surprised by it was Aidan. I’m looking forward to going to his session next year and see what he has in store for the audience. Congratulations Aidan!

With some popcorn and an ice cream bar for sustenance, it was time for my last session, DCIM-B373 How IPv6 Impacts Private Cloud Deployments (watch session recording) with Ed Horley. I’ve been following Ed for some time, and I’ve always heard that his sessions are top notch.  I haven’t done much with IPv6, so this seemed like the right time to finally catch one of his sessions. That last time slot before the closing party is always one of the toughest at TechEd. People are already thinking about her party or packing to leave, so turnout can be decidedly mixed. Ed had a pretty good turnout all though, and he moved things a bit faster than normal in the interest of getting us out early.

I can’t say I’m an IPV6 expert after having attended the session, but I do have a better appreciation for the challenges of moving to IPv6 if you’re moving to the cloud. Windows has a dual-layer network stack with both IPv6 and IPv4 active by default, and it will prefer IPv6 over IPv4. If you’ve setup a system and loaded Window or Windows Server in the last few years, you’ve deployed IPv6 even if you didn’t realize it. When you move to Private Cloud with the Windows Azure Pack, you can select either IPv6 or IPv4, but not both (plus it requires everything to be setup and working in VMM and Hyper-V first). Once you move to Azure, you’re IPv4c only. So there’s still some work to be done in this area. If you want to find out the state of IPv6 support in individual Microsoft products take a look at IPv6 Support in Microsoft products and Services on MSDN. Consider getting his book, Practical IPv6 for Windows Administrators, if you’re interested in finding out more about IPv6 and how it applies to IT Pros. I know I’m going to buy a copy. 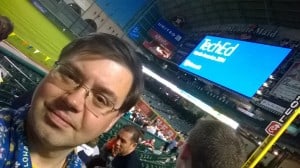 fter the last session, the only thing left was to say good bye to the convention center and return to the hotel to get bags packed as much as possible before heading to the party. The decision to skip lunch was turning out to be a bad idea (although I was told that skipping the lunch at the convention center was a very good idea), and only the ice cream bar was keeping me going. I walked over to Minute Maid Park for the party and hustled to the nearest food stand to get something, anything to eat. Turned out to be a sausage cart and it was pretty good. The funny thing is, I didn’t have anything else to eat until much later that night at the Hilton.

I wandered around, met up with Chris Noyes and we both went on the field tour. At the Boston party at Fenway in 2006, we were also able ot walk around the field on the warning track, but at Minute Maid, we had actual tour guides giving us the history of the park and talked about some of the nuances like Tal’s Hill in left field (yes, there’s a hill). It was a long wait for the tour, but well worth it.

After we finished, I met up with Agent P again, and we made a circuit of the stadium, timing it just right for the annual Krewe photo (which I missed last year). I’m not sure what it was, if it was the professional photographer, or what, but we were in the seats and had photos within 15 minutes. That’s a record for the Krewe I think. After we finished the circuit, Agent P wasn’t all that excited about the party, so we headed back to the Hilton. I waited in the lounge while she packed, and while I was sitting there, the Marks (Russinovich and Minasi) walked in and they and the rest of their group commandeered an area. Agent P rejoined me, and we snapped a selfie with the backs of the heads of the Marks. 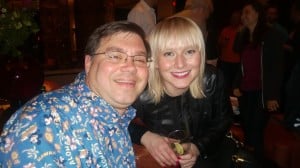 As the evening went on, more and more people, and soon it was quite a party at the Hilton lounge. Before things wound down, Ed Horley introduced me to Paula Januszkiewicz. Her sessions are always some of the best, and it was a real treat to talk to her. I was pretty pleased with the way Ed described me in his introduction. I sounded way more interesting than I really am. I should have him record the intro for me so I can play it back when I meet someone for the first time.

As the last stragglers found their way to the Hilton after the bars started to close, there were a few goodbyes along with some plotting to get a certain IT Pro Evangelist and his hat to St. Louis.

And then it was over…