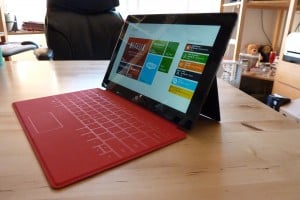 I pre-ordered a Surface RT as soon as they went on sale October 16. I went with the 32 GB model to keep costs down, and with a 64 GB Micro SD on order as well, I didn’t think space would be an issue. Add a red Touch Cover for some color, a couple video adapters, and the order was complete. Then the not-so-long wait until it arrived on Friday. I unboxed it at home that night, set things up, and started putting it through its paces.

There are a hundred blog posts out there about people and their Surface RT, and I’m not going to go into everything they covered. You’ve probably read all of the ones I’ve seen and more. It seems most people are quite happy, some even seem surprised that they are. A few aren’t and are planning to return their purchases. I’m firmly in the first camp. The Surface RT is everything I hoped it would be. It isn’t perfect, but it is darn near as close as anything I’ve seen. Especially for a v1 product. The people on the Surface team should be proud of what they accomplished.

Full disclosure: I paid for this out of my budget at work. I also plan on ordering a Surface Pro as soon as they are available as well. My current mobile device suite is made up of the aforementioned Samsung Series 7 Slate (with Windows 8), a 16 GB iPad 2, and a Windows Phone (HTC Trophy). My plan is for the RT to replace the iPad, the Pro to replace the Samsung, and I really want a Nokia Lumia 92x but since I’m on Verizon I may have to settle for an HTC 8x. Why have both an RT and a Pro? I see the RT as my personal, at home device, whereas the Pro will be my work laptop for when I need domain access, desktop apps, and all the things that RT can’t do. Could I get away with just a Pro? Perhaps, but I need to see if the Pro can offer the same battery life that the RT has. Plus, I’m able to have both thanks to work, so why not?

More Full Disclosure: I’m a fan of Microsoft and their products, so I may be predisposed to like the Surface and Windows 8/RT. I’m not a zealot about these things; I do own an iPad after all.  I’m sure this isn’t a surprise to anyone, but I wanted to make sure it was out there.

With that out of the way, back to my thoughts on the Surface RT.

There are some annoyances.

I expect as continue to use the Surface RT more, I’ll come up with additional “likes” and “dislikes” but for now, these will have to do. Until then, what do you think? How do you like your Surface so far?

Oh, I almost forgot to mention, I wrote and posted this blog post using Word 2013. I’m not sure I want to use it as my primary blog editor, but it was much better than I expected. See Enrique Lima’s (@enriquelima) blog post for details. He sets it up to work with GeekswithBLogs, but it’s pretty straightforward how to configure it for the other supported platforms.