Skip to content
HomeMicrosoftMy Life as a Bot at Microsoft Ignite

Last week in Atlanta, 23,000+ IT Pros gathered in Atlanta to spend a week immersed in everything Microsoft has to offer. The occasion? Ignite 2016, the second installment of Microsoft’s super-conference. Originally scheduled to take place in Chicago in the Spring, Ignite moved both on the calendar (to September) as well as on the map (to Atlanta). Now with the event having come and gone, and everyone is back home, I’m posting my thoughts of my week in Atlanta. There’s just one catch. I wasn’t there. 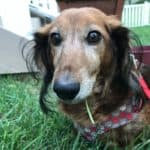 Our dog Shaggy, a 12-year old dachshund, suffered a back injury that required my attention. So I decided at the last minute to stay home and watch over him while he recuperated. He’s doing much better now, and should be back to normal in a couple more weeks. That’s him in the photo to the right. How could I leave that cute little pup, right?

With the decision made, I unspooled my travel plans. Flight? Cancelled. Hotel reservation? Transferred to a friend (giving them a nice upgrade from the airport to downtown).  I was set to be well and truly depressed that I was staying home. Cancelling Ignite for me is like telling a kid that you’re cancelling Christmas, their birthday, and grounding them until next year.

Have Bot, Will Travel

I did get to go to Atlanta, just in a different form than I originally expected. Thanks to a pilot Microsoft conducted at Ignite, I was able to attend… as a bot, specifically a BeamPro bot. The full name is the BeamPro Smart Presence System by Suitable Technologies, a.k.a. “bots.” 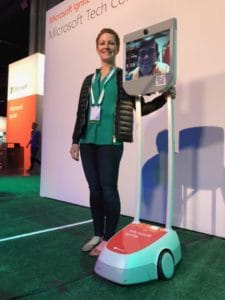 As you can see from the photo of me and Microsoft’s Julia White, the BeamPro has a motorized base (think souped-up Roomba) with a top speed of 2 mph (enough to keep up with someone walking, as long as they don’t walk too fast). The base propels a “head” consisting of a 17in display, six microphone array, speaker, and two wide-angle cameras.  The person controlling the bot, known as a Beam pilot, uses an app (Windows, Mac OS, and even iOS) to select an available unit and move around the location. As long as you have access to the network and don’t fall down any stairs or escalators, you’re in business. Elevators are Ok, but without a way to push that button, you might have to wait for a friendly human to pass by.

While Suitable Technologies manufactures and sells the Beam bots, Event Presence (@EventPresence) is the company that brought the Beam bots to Ignite. You can read more about Event Presence on their website, but basically they offer a full telepresence package to conference and meeting organizers making Beam bots available for remote attendees as well as to server as supplemental staff for greeting and information sharing needs.

Two Bots Walk Into a Bar…

I know it sounds like the start of a joke, but that’s what really happened at Max Lager’s the Sunday night before Ignite.  Offered the chance to use a Beam at the Krewe Meet-and-Greet Sunday night. I setup my Surface Pro at the kitchen table and “beamed” in to an available bot. When I “arrived”, my friend Fredrik Nilsson was already there in his bot, controlling it all the way from Sweden. The party hadn’t started yet, but we were practicing with the bots before people started arriving. It wouldn’t do to run someone over with an out-of-control bot. After a quick tutorial from the team with Event Presence, we were set to go.

The space itself was challenging. Wi-Fi at a bar isn’t usually the greatest, and the Meet-and-Greet venue lived up to those low expectations.  I would often be talking to someone when my connection would drop, leaving the bot dead and me hitting reconnect again and again. After reconnecting, I was never sure what I would see when I was back in the bot. Some people go to a bar and black-out, but it usually requires one to drink quite a bit. Here I was able to “blackout” while remaining completely sober.

At one point I was led into another room for announcements, Rick Claus (@RicksterCDN) clearing a path for me like a VIP. Unfortunately, I wound up out of range of the hotspot my bot was using, and I was gone. When I eventually “woke up,” I was back in the other room.  These blackouts, low lighting, and tight clearance between furniture made for a challenging evening. I thought it worked well, but I wasn’t sold 100%.

Beaming Into the Expo

It wasn’t until Wednesday that I actually felt up to giving the bot another spin. I’m glad I did, because my experience piloting a bot on the Expo floor was eye-opening. All the things that made it challenging at the party were completely turned around. Solid wireless, good lighting, and wide open spaces to navigate (for the most part) all made me almost forget that I wasn’t actually in Atlanta.

Getting my bearings was challenging though. Units started out docked at charging ports in two areas in the Microsoft Showcase.  If the previous pilot beamed out while the bot was somewhere else on the floor, however, you had no idea where you would be. I drove around a bit and compared the scene in front of me to the Expo maps. Asking people for directions was usually the better way to get your location. People were usually eager to help and seemed to enjoy the opportunity to interact with me and the other pilots.

Of course Interacting with people is the primary reason for using the Beam bot. The novelty of the situation meant people would seek me out to find out more as I rolled by. There were a few people who thought it would be fund to tap the bot, or cover the camera, but thankfully I experienced less of that than other pilots. Whenever people walked by and glanced at the bot, I always said “Hi” or waved. It was fun to see their often startled reaction. I think many people didn’t realize there was actually a human behind the bot, until it started talking to them.

While I was piloting a Beam, I managed to…

It was truly amazing, and I predict you’re going to see Beam bots show up at many more conferences and in even greater numbers.

Check out this video showing some of my Beam selfies from the week. In addition to the people I already mentioned, keep an eye out for Joey Snow (@JoeySnow), Phoummala Schmitt (the one and only @ExchangeGoddess), and Claudia Perez (@ClauPerez), to name just a few.

There was a funny moment when we went to take our Spark 360 portrait. Once we were inside the little studio, the woman who was directing where we should go kept referring to me as “the bot.” I finally said “The bot has a name.” which caught her off guard, but she did ask me my name and address me directly after that. Score one for robot rights.

Where Do We Go From Here?

I can see Microsoft offering access to Beam bots (at a cost) for remote attendees and others. Perhaps press will beam in for an interview, or someone with mobility challenges will attend and engage in a way that isn’t normally available. It’s an exciting development, and I’m interested to see how their use expands next year. I don’t plan on missing Ignite again, so I look forward to meeting next year’s pilots. Maybe they’ll have figured out a way for the bots to collect swag for their pilots.

I have to thank Denise Begley at Microsoft and Steve Kompolt with Event Presence for granting me this unusual opportunity. Even though I stayed home this year, I avoided missing out on the professional and personal opportunities offered.  Hopefully my experience with this pilot and my feedback will help make this a valuable resource in years to come.