I don’t normally have much to say about Google and its products. I haven’t been a big fan of the company, generally ranking the big three — Microsoft, Apple, and Google — in that order. It’s partly why I went with an iPhone instead of an Android device after I gave up on Windows Phone. That’s why I surprised myself in December when I ordered Google Wifi, their mesh-Wi-Fi hardware, after getting frustrated with spotty connectivity at home.

Our home was built in 2000, and of all the design choices we made at that time, I regret not wiring the entire house for a home network. We were trying to stay within our budget, and at the time it seemed like wireless would be sufficient before too long. As it turned out, it took a bit longer than anticipated.

The way our house is arranged, the home office is in an upstairs corner room. That’s the room where the cable modem and wireless router were located. Wireless was great in the office and on that side of the house, decent in the family room downstairs, and mediocre (at best) on the other side of the house where the master bedroom and kitchen are located. If I had wired the house properly, I could have moved the wireless access point to a more central location, but I didn’t so it would have been too much work.

Eventually I added a wireless repeater in the family room. That boosted performance for streaming video and gaming in the family room, but it was still unreliable in other areas.  After my phone switched over from Wi-Fi to LTE for the millionth time in the kitchen, I finally decided to look at a wireless upgrade. That’s when I started looking at a wireless mesh network.

I looked at AmpliFi (Ubiquiti), Eero, Google Wifi, and Orbi (Netgear) and compared them against some basic criteria:

Orbi isn’t technically a mesh network, but Netgear is positioning it against products that are, so I included them in the list. The systems all come in various combinations of base units and satellites. Which combination you go with depends on the size of the area you’re trying to cover. I’ve listed the different combinations prices.

After reading the various articles and reviews, it seemed like all four would meet my first three criteria. Google Wifi had a slight edge on affordability, so I decided to give them a try.

Google? Are you Serious?

Now I know what you’re thinking. Why would I let Google into the heart of my network, with access to all my traffic, just to save $100.  For one, don’t sneeze at a hundred dollars. I can use that money for something else.  Second, the privacy policy is straightforward and states up front (in bold text no less):

Importantly, the Google Wifi app and your Wifi points do not track the websites you visit or collect the content of any traffic on your network.

What do they collect?

However, your Wifi points does collect data such as Wi-Fi channel, signal strength, and device types that are relevant to optimize your Wi-Fi performance.

I don’t have any issues with that information being collected and used. You also have control in the app to fine tune what is collected. There are three categories you can turn on and off:

I leave them all enabled. I’m OK with anonymous data for feedback on products, and disabling the first one would limit the effectiveness of the product.

Enough about Google and privacy (for now), and on to the product. The box arrived with my three Wifi points. I was in a rush to unpack the box, so this picture isn’t great, but this is what you get: 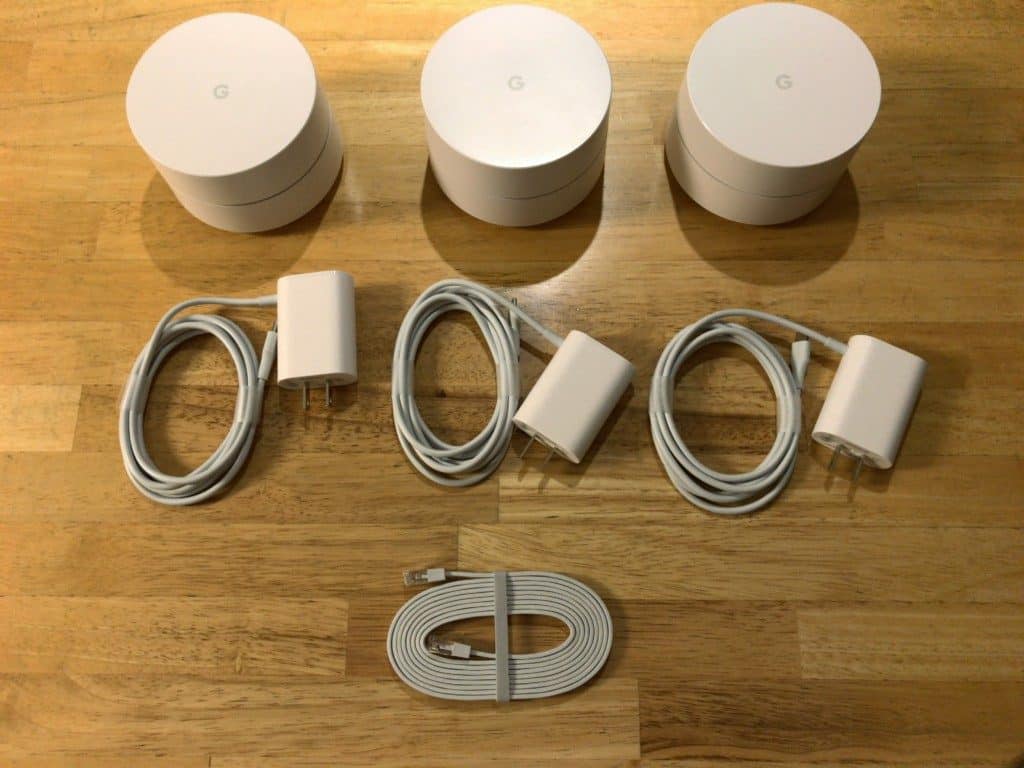 Each Wifi point has a USB-C port for power and an Ethernet port. On the bottom of each is a unique identifier and a QR code used during setup.  Setup was simple:

At that point you’re good to go.  One important thing to note with Google Wifi. It uses the same network name for both the 2.4GHz and 5GHz networks. They do this to simplify the experience, and most devices choose the 5GHz band. Google uses Automatic Band Steering to help devices select the correct network, but this doesn’t work on all devices (more on this later).

With the network setup, you can use the app to check the status of your network and do some simple setup. For example, these are the results from testing the Internet connection, mesh, and for my network. It’s not super-detailed, but it’s sufficient for my needs. 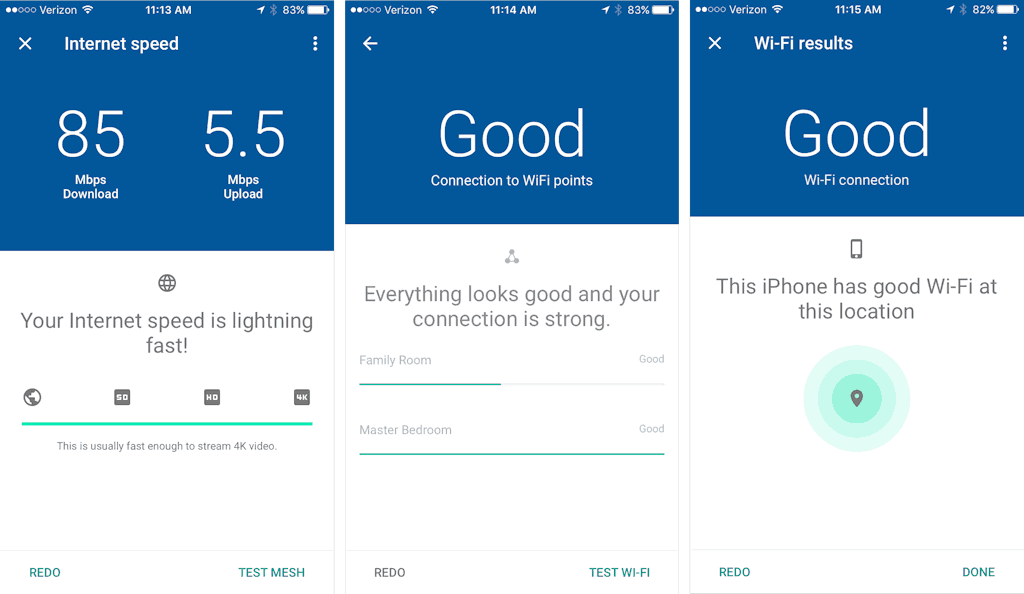 If you go into the Settings section of the app, you can do the following:

You can also setup a guest network. The great thing about this guest network is it’s isolated from your own network, but you can still selectively allow access to other devices. Want to let your guests print to your network printer or connect to an Apple TV? You can do that without giving them access to everything. There is a web site (http://on.here) your guests can access to see all the devices they can access and/or control.

If you have kids, there is a Family Wi-Fi feature that lets you pause Internet access for selected devices either using a schedule (no Internet during dinner or before bedtime) or an on ad hoc basis as needed.

Before I installed Google Wifi, I went around and used Ookla Speedtest to test my connection at locations around the house and yard, both with and without the range extender in place. I had been using a Linksys EA4500 Wireless Router and RE6500 Range Extender. I did the same after setting everything up. So how did we do? 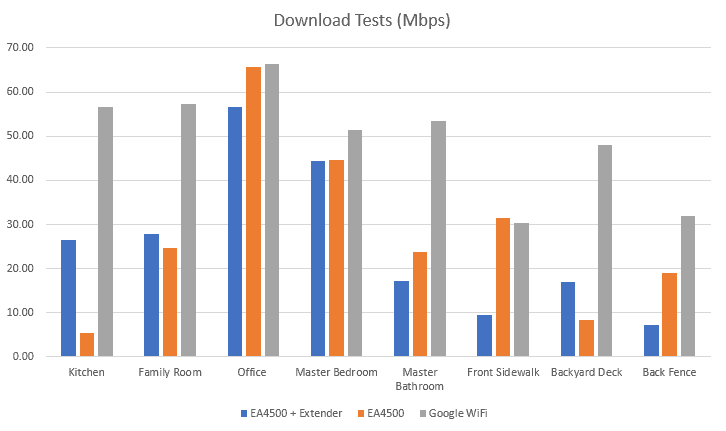 As you can see, my download speeds improved across the board, quite dramatically in certain locations. Even outside at the edges of our lot, I’m still getting 30 Mbps, and I can maintain a connection a good way down the block while I walk the dog.  Inside the house, I’m not seeing any transitions from Wi-Fi to LTE on my phone anymore.

I didn’t include a chart showing upload speeds compared because there wasn’t much of a change.  My upload results were consistent before the upgrade and they remain the same afterwards.

When I first set everything up, my devices didn’t automatically reconnect. It took me a bit before I realized that I hadn’t maintained the capitalization from the old network name. Once I fixed that, everything came back on the network without issue.

While most of the devices connected to the 5GHz network, the Xbox One units both would only connect to the 2.4GHz network. There is no option to manually select the band you want to use, so they must simply connect to the first network they see. On my old setup, each band had a different network name, so you could force one band by selecting that network. With one network name for both bands, that isn’t an option anymore. There’s a UserVoice suggestion “Add option to force Xbox One to use 5 GHz (wifi)bandwith” that could use some more votes. My solution was to use wireless bridges connected using 5GHz and connect the Xbox One units to the bridges.

Google Wifi has been working well for me, but there was one day when it didn’t. February 23 was a bad day for users of Google services, especially Google Wifi users. That’s the day a problem in the Google Accounts engine caused Google Wifi networks to return to factory settings.  I was on my way home from work when I received an alert on my phone that my network was down. When I arrived at home, I confirmed wireless was down, and power cycling didn’t help. By this time, word had spread online and the forums on the Google Wifi support page had several people saying that a factory reset was the only way to get back online.

I followed that advice (which Google also started giving out later that evening), and set everything up from scratch. Soon my wireless was back up and running, but I’d hate to have to do that on a regular basis. Google has yet to explain why Google Wifi units were affected this way, and I doubt they ever will at this rate.  It’s a bit disconcerting to think that Google can effectively brick your network from afar, but that’s the tradeoff when you move to a cloud-enabled network like Google Wifi. Hopefully this was a bug that will get fixed rather than a “feature” they leave in place.

Would I do it again? Most definitely. Google Wifi has been a huge improvement for my home wireless network. It’s simple to install, simple to manage, and the coverage and speeds are great.  I recommend it for anyone who is looking for a simple mesh network and aren’t wigged out at the thought of it being a Google product.  If that’s a concern for you then you should look elsewhere. Otherwise, add them to your list for any home wireless network projects.