The Attendee Party… I’ll start by saying I wasn’t thrilled by the party. I wasn’t in the best mood that evening, and the party fed into that. It was definitely the low point of the week for me as far as the week’s evenings were concerned. Here’s my run through, and while you read this, please note that I think the people who planned MMS did a great job overall. I don’t want my lack of enthusiasm is directed at anything other than the party.

The venue for the attendee party was XS, the $100 million nightclub at Encore. Famous for its price tag and the swimming pool at the center. Apparently the big deal in Las Vegas are pool parties and DJs. Check out this USA Today article for some background. Now before you go thinking the wrong idea, the pool played no part in the MMS party. I mentioned the article just so you’d know the world in which a venue like this exists.

First, some geography. You may recall that MMS was at Mandalay Bay and most of us are staying there or at Luxor. These are on opposite ends of the strip, roughly 2.5 miles apart, and no transportation was offered. That’s right, no buses were waiting to take us to the party. I didn’t believe it at first since we always have buses at TechEd, but apparently this is normal for MMS. Our only options were to walk, take the monorail, take a cab, or some combination of the three.

I wound up walking after Rick Claus tweeted that he wanted to get some Fitbit steps in and walk to XS. There were six of us plus Rick, and after giving everyone a verbal warning that Microsoft was not responsible for our well-being on this walk, we were off. We rode the tram from Mandalay Bay to the Strip and walked about 2.1 miles to XS. The weather was actually perfect for our walk. We did the full distance and I never broke a sweat. (If only we could expect the same at TechEd in New Orleans. I’m already sweating thinking about that.). We arrived about 8:15, a little later than anticipated, and the place seemed full already. If I could do it over again, I’d have rerouted us up the west side of the Strip instead of the east. The west side has much larger sidewalks without all the diversions into stores and crowded sidewalks. Only big, new casinos and hotels on the other side.

So we get there, and my first thought upon entering is that the place is already pretty full. I’m not a huge fan of crowds, and wading through everyone to make your way through the club makes me uncomfortable. One you managed to get through the crowd and in the general vicinity of the bar, there was an even more dense group of people all waiting to get a drink. For the amount of people waiting to order, they should have had double or triple the number of bartenders. It should not take 15 minutes to get a drink. So getting a drink was a mess, but what about the food?

The food. Don’t even get me started on the food. There were tables offering various grilled cheese sandwiches, crudités, and desserts. That’s it, nothing more. Oh, there was an occasional small appetizer that floated by outside as a waiter occasionally drifted by, but that was it. I was quite hungry, having not eaten dinner under the assumption, mistaken it turned out, that there would be a more substantial menu of food. So I ate grilled cheese, and celery, and one dessert. If you’re planning a party decide to take the money away from food and put it all in the venue and entertainment, that’s fine, but please warn people to eat dinner first. I may have been in a better mood if I had gone to dinner first. I can’t even imagine what people who bought guest passes for the party thought after spending $125 (or something like that) for grilled cheese.

The entertainment was DJ Ravi Drums, who is a DJ that also plays drums. I’m not quite sure how he makes that work, but from what I saw, he does quite well. I like dance music and remixes quite a bit (but don’t dance, go figure), but I just wasn’t into it that night. Maybe it was the crowd, maybe it was the hunger, or maybe it was my frustration at not being able to meet-up with a couple of folks that I had tried to see all conference. All I know is I wasn’t enjoying myself and decided to head back to the hotel around 10:30. I walked, getting back to the hotel around 11:40. By that time, even though I was hungry, getting a meal and then going to bed just sounded like a bad idea, so I packed for checkout the next day and called it a night.

I know I probably sound like a stick-in-the-mud or a real grump, but I expected something more. I feel bad for complaining because, as I said at the start, I know the people who organized MMS put a lot into it and setup an event that they thought would be an awesome evening. It probably was for many people, just not for me. If I were going to give a list of suggestions for how to improve the party (and I am), this is what I’d say:

OK, I’m getting down off my grumpy old man soap box. I suppose I’ve had more than my fair share of theme parks and that sort of attendee party over the years, so I shouldn’t begrudge anyone who enjoyed the XS party their fun. 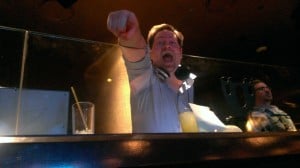 I do want to mention that when we arrived, Joey Snow was doing his set to get the party started. I think Joey is a great guy, both personally and professionally, and he’s one heck of a DJ (as far as I can tell). He posted his set from the party to SoundCloud, and you can listen to it below. That’s one part of the party I thought was top-notch. So sit back, listen, and enjoy.