While preparing for this week’s Microsoft TechEd conference in Houston, an email carried in my Inbox with one of those photos that immediately captured my attention. It’s a picture of a young boy driving a car on a concrete track, the kind of ride you see at any number of small regional amusement parks. What made me look twice, however, was the car he was in. Why? Well, here’s a little background.

Are you familiar with the Autopia attraction at Disneyland? It’s a ride where you can drive small cars around a track, and you can find it at other Disney parks, sometimes under a different name.  It has operated at Disneyland (in various forms) since the park opened in 1955, but it wasn’t the only Autopia ride. In 1956, the Junior Autopia opened with a center rail to keep the cars on the track and booster blocks to let smaller kids reach the pedals. In 1957, the Midget Autopia opened.

The Midget Autopia was manufactured by Arrow Development and used smaller cars than the other Autopias for younger children. No adults were allowed on the ride. This was for the little ones only.  The attraction operated until 1966 when it was removed to make room for “it’s a small world”. Unlike most rides that were removed, however, the Midget Autopia had a second life. In Missouri of all places.

Walt donated the ride to Marceline, Missouri, his boyhood home. The ride and ten cars were installed in Walt Disney Municipal Park, and operated for a few years before wear and ter took their toll and the ride closed. The winding concrete track still remains in the park, minus the metal guide. One of the ten cars is on display at the Walt Disney Hometown Museum, another was bronzed and installed alongside Disney’s Autopia, and the remaining eight that Marceline received are in storage awaiting restoration. There has been talk of recreating Midget Autopia at the museum, but it’s just an idea now. So it would seem that was the end of the Midget Autopia.

Maybe not. Let’s go back to the photo I mentioned before. Here it is: 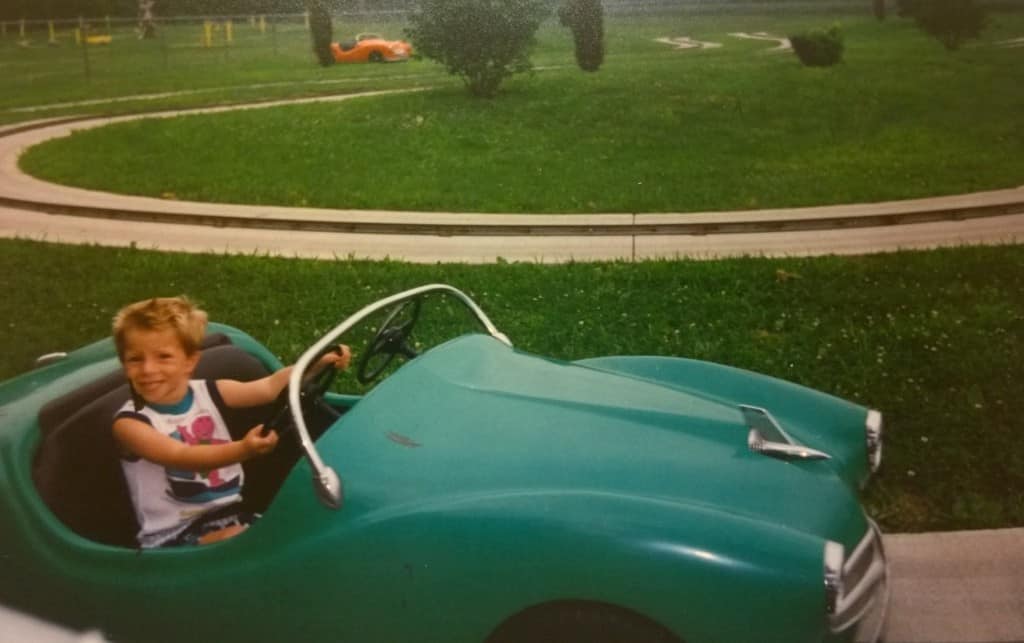 The car in the photo (and one in the background) looks exactly like a Midget Autopia car. There’s the distinctive hood ornament, the oval grille divided in four sections, and more. The only difference I can see when I look at old photos is the back of the seat . It seems just a bit different at the top edge. What’s the story here?

The boy in the photo says it was taken in 1993 or 1994 at Old Indiana Fun Park, near Thorntown, Indiana. The park is no longer there. Six Flags bought the property, but never did anything with it. It was eventually sold, and is now Indiana’s latest private nature preserve. I don’t know what happened to the rides that were there, if they were scrapped, sold, or simply abandoned somewhere.

So what’s the story behind that car being at that park in the early 90’s? Perhaps Arrow Development used the same body they designed for Midget Autopia with other ArrowFlite Freeway Auto Rides they sold to other parks. It would have been a simple matter to reuse the molds to make new bodies. I’m not sure if the cars were custom designed for Disney or if this was an off-the-shelf design. Once the ride was removed from operation, Disney may not have cared whether the design was reused.

Or could these have been additional cars from Midget Autopia? Only ten were sent to Marceline, and while I don’t know how many they had at Disneyland, I would expect there were more than ten.  If there were more, could some have found their way to Indiana? I find it hard to believe that could have happened without Disney enthusiasts finding out about it. I’ve been unable to find any mention anywhere of additional cars turning up, least of all in Indiana.

If anyone has any information that could shed some light on the origin and fate of the cars at Old Indiana Fun park, please let me know. I’d love to know more about this story.

Here is a list of websites and article I used as sources for this post.  Definitely check out the articles at Werner Weiss’ Yesterland site. He has some great photos and you can learn a lot more than what I covered above.