Microsoft revealed the Surface, a Microsoft-branded tablet. The Surface website is up now with a small gallery of photos and a detailed spec sheet for both a Windows RT and a Windows 8 Pro version. 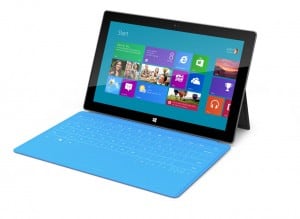 The RT version is the one that will be held up against the iPad and the specs are competitive. The Surface with Windows RT is 9.3mm thin and 676g. The new iPad Wi-Fi comes in at 9.4mm thin and 652 g. You know they were really working to beat the iPad on thickness even if only by 0.1 mm.

The Surface also has a 10.6 in full HD display. An integrated kickstand and cover that doubles as a keyboard and trackpad are great touches. I’m sure third-party manufacturers aren’t thrilled, but this is all Microsoft.

The cover is especially impressive, simply from an engineering and design perspective. Will be interested to read the inevitable blog article form the Windows 8 folks on the development of the cover.

Unfortunately we didn’t get any details on a release date or a price. They said that pricing will be priced “like comparable tablets based on ARM.” The Pro will be priced like a comparable Ultrabook. Availability of RT to coincide with Windows 8 launch. Pro  will follow about three months later.

I’m really excited about this product. This looks exactly like the iPad replacement that I was hoping would be available. I’ve owned one and only one Apple product in my life, an iPad 2. Signs are looking good that I may be Apple-free later this year.

Update: Video of the announcement event is now available as both a stream and as a download.

Update: If you’re wondering what is happening with the original Microsoft Surface, that product has been re-branded. The new name is PixelSense, and instead of being the actual device, the name appears to apply to the software.  The PixelSense site refers to the hardware as the “Samsung  SUR40 with Microsoft PixelSense.”