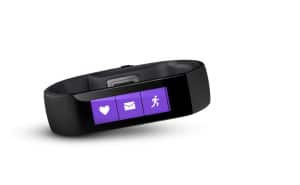 Sorry FitBit. From the One to the Flex to the Force, you’ve worked well for me (except for the band… major pain in the you-know-what every time it came loose), and I’ll be sad to see you go. I thought I might wait for your new products, but while they are definitely a step-up, they don’t quite match what I saw tonight.  Yes, there’s someone (something) else. Meet Microsoft Band.

Microsoft’s wearable, expected to drop soon, made its debut tonight after the product leaked when the companion app showed up in Google Play and the Apple App Store. The product webpage is now live and you can order the Band in the online Microsoft Store.  The Band goes for $199 and comes in three sizes (Small, Medium, and Large). There is a sizing page online along with a downloadable PDF sizing guide you can print and use to find the best match for your wrist. Or you can try on the real thing at your local Microsoft Store. Microsoft Store confirmed via Twitter that stores will have inventory for demo and purchase starting tomorrow (October 30).

While the Band will tell time, Microsoft isn’t pushing it as a SmartWatch. This is a SmartBand and is focused on being the device for the “other” wrist. It’s uber-compatible, with apps for Android, iOS, and Windows Phone. It integrates with other apps such as RunKeeper. It has ten different sensors, monitoring everything from your heart rate to your UV exposure. It handles alerts and notifications such as email, Twitter, and Facebook. It’ll even integrate with Cortana.

I expect it’ll integrate with Xbox Fitness at some point, but for now, let the Band be your trainer. In partnership with fitness partners like Gold’s Gym, Shape, and Men’s Fitness, the Band can guide you through workouts. Take a look at this video showing a guy going through a guided workout.

For the full run down on specs and features, visit the Microsoft Band page.  I also recommend you check out the article The Verge published because it gives you a lot of insight into both the Band and how Microsoft sees this product, not so much as an end in itself, but rather the starting point of something bigger with Microsoft Health. The Microsoft Band is going to be just one of many entry points for collecting your health data.  It’s a pretty ambitious goal, but they obviously have a vision and are ready to push forward.

I can’t wait to get my hands on the Band and put it through its paces. I’ve been saying I need to get serious about losing some weight, so here’s a great opportunity to put it to the test.