Skip to content
HomeMicrosoftKicking the Tires on the Lenovo Tablet 2 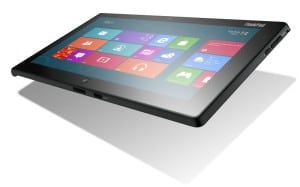 One of the Windows 8 devices I’m trying out for work is the Lenovo ThinkPad Tablet 2. My Lenovo sales rep had a Tablet 2 (T2) along with some other devices during a recent visit. As soon as I held it in my hands, I knew I had to get one of these.  It is light (starts at 1.25 lbs) and has a great feel in the hand. I’ve read some reviews where people remarked that the plastic case felt cheap, but I like that silky feel that is characteristic of the ThinkPad line.

I also have a Surface RT and Surface Pro (what’s the point of having a budget if you can’t spend a little of it on new devices?) that I’ve been using regularly.  I’m a big fan of the Surface RT, but I’d like to use the Pro a bit more and take it on a trip before I decide how I feel about it. The T2 sits somewhere between the two Surface models. The T2 uses Intel’s Atom Z2760 (a.k.a. Clover Trail) which brings lower power use and longer battery life, like the Surface RT, but with the ability to run Windows desktop apps like the Surface Pro.

Feedback online has been that performance has been lacking on the T2. While I know it isn’t going to rival the Pro, I’m hoping it will be enough to satisfy most of my needs when travelling.  I will gladly give up some power for longer battery life and lighter weight, but it has to be usable. My needs are pretty modest.  My main goal is being able to run a few desktop apps like Outlook and the Cisco AnyConnect client. If the T2 lets me do that, and it doesn’t feel like it is sucking wind, I think I’ll be happy.

I’m still waiting to receive the case and Bluetooth keyboard but I expect I’m going to miss the Type and Touch Covers on my Surfaces. They really are one of the killer features of Surface for me. So thin and inconspicuous, yet so functional. Whenever I use my iPad, I really hate not having something like the Touch Cover. I’ll have to see how the Lenovo keyboard works out.

I’ll report back once I’ve had time to put the T2 through its paces and let you know what I think.