A few weeks ago, I received an email from a local AT&T PR person. She gathered from my tweets that I was a fan of Windows Phone and wondered if I would be interested in trying out the HTC Titan for a couple weeks. I’ve been dealing with a serious case of phone envy ever since I saw the Titan at the October Windows Phone Inner Circle event, so it didn’t take long to say yes.

Lo and behold, by the end of the week the phone had arrived, charged and ready to go on the AT&T network.  If you’ve never used the Titan, understand that this is a big phone.  I have Trophy (Verizon Wireless is my carrier) and a quick look at the specs shows the physical differences between these two phones. You can find the full specs on HTC’s web site (Trophy specs & Titan specs)

My only real challenge with this phone was how to carry it. I’ve never been comfortable keeping a phone in my pocket, but there really was no other place to stow this phone.  The saving grace was the thickness of the phone. Even though it is significantly larger in the other dimensions, it is slightly thinner and when compared to the extended battery pack I have on my Trophy, it is downright svelte. I’m sure I’d get used to the change from a belt clip to the pocket. A First World problem to be certain.

Using the Titan is like using every other Windows Phone, a great experience.  The Windows Phone OS is the best out there in my opinion, and it’s no different on the Titan.  Fast, responsive, intuitive, efficient… all characteristics of the platform I appreciate on a daily basis.  Since this is a Mango handset, there are some hardware enhancements.  There is a forward-facing camera (not a big deal for me until Skype is available), a gyroscope, and a faster processor.

The two areas where the Titan really stands out as a Windows Phone are the display and the camera.  I’ve never been a big fan of screens past 4″. I rarely watch video or play games on my phone, so the big screen always seemed to come with too high of a cost in weight and size. On the Titan though, the larger screen is amazing.  The brightness and intensity of the screen makes everything pop right off the screen. The colors are so much more vivid than on the Trophy. Browsing the web, working with photos, watching video, etc. were all so much more engaging as a result.  Whenever I would switch to the Trophy, I kept wanting to clean the screen in hopes of removing whatever was keeping it from looking like the Titan. Alas, that’s just the way the display is. I do wish, though, that you could adjust the size of the Tiles on the home screen to make better use of such a large display.

The camera is the other outstanding feature of this phone.  I’ve been disappointed with the camera on the Trophy from the start. Maybe it is just my phone, but I suspect it is simply the weakest part of the Trophy. I use the Foodspotting app quite a bit and sometimes I actually stoop so low as to use my wife’s iPhone to take pictures for spotting since the Trophy photos are so mediocre in anything other than bright daylight.

The Titan has an 8 MP camera as compared to the 5 MP on the Trophy. I don’t know the specifics of the rest of the camera hardware, but whatever it is that HTC put in the Titan, it makes a world of difference. Pictures were bright, vivid, and sharp, even when using the flash.  Response time was fast as well. It is simply a better experience from start to finish.  When I had to return the phone to AT&T, the worst part was having to give up that camera.  If I weren’t in the first year of a 2-year contract with Verizon, I’d seriously consider switching just for that camera.

Here is a comparison showing a photo from each camera. The Titan is on the left, Trophy on the right. The photos were taken at the same time, under the same conditions. I think the difference is pretty dramatic. 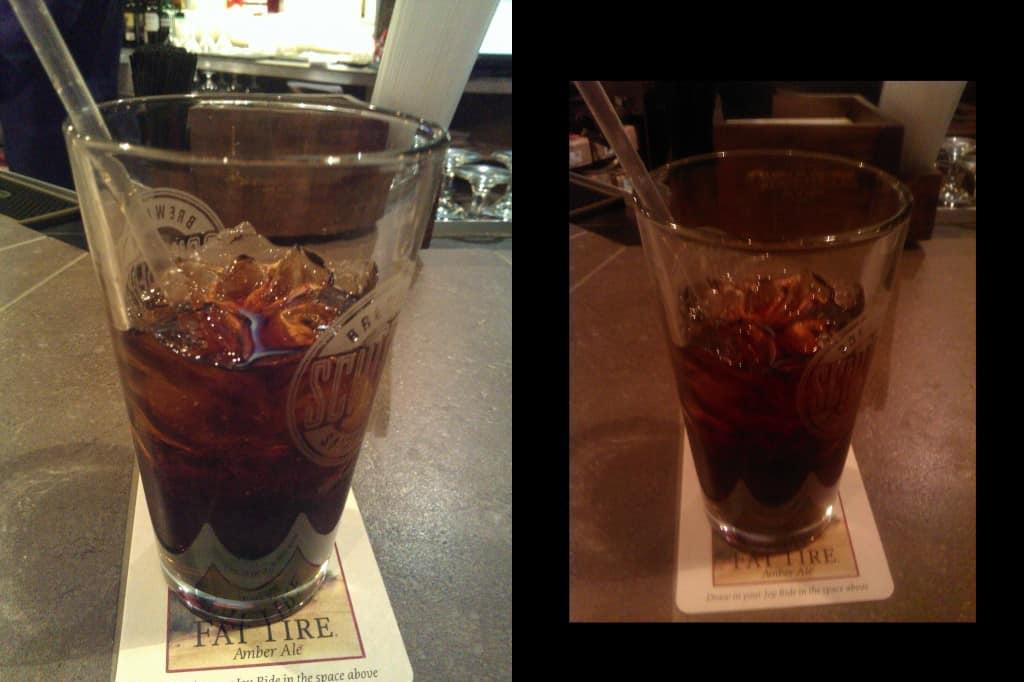 The service on the phone seemed to be pretty comparable. I’ve been very happy with Verizon but the AT&T service on the Titan seemed OK. I know people often make comments about issues with AT&T service, but during my short time using it, I didn’t experience any problems.

Have you noticed the trend here? AT&T manages to get all the best Windows Phones. Unlike Verizon where they have one and only one phone, AT&T keeps releasing more and better phones. It is nice to see a carrier that appears to be committed to the platform. Verizon has said they’re not interested in offering anymore Windows Phones until 4G LTE is supported. We’ll see if they back that up in the coming months. I’m not holding my breath.