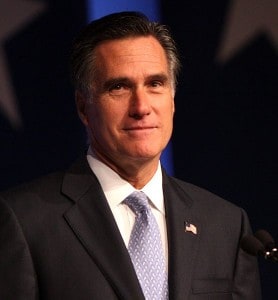 Why does it always have to be the Republicans? Last election it was Sarah Palin. This election it is Mitt Romney.

Wondering what I’m talking about? Genealogy. Cousins. I’m related to both of those… Republicans. Sigh.

During the last election I determined that Sarah Palin and I are 10th cousins once removed. We share Martin Kellogg (1595-1671) as our nearest common ancestor. Seeing the recent story showing a connection between President Obama and Mitt Romney, I did some checking to see if the Republican nominee for President and I share an ancestor.  As I expected, we do, and his name is William Comstock (1595-1683). This makes Mitt my 10th cousin once removed.

Of course, the reality is many marriages back then were between cousins, and as a result, you probably have fewer direct ancestors.  So instead of your family tree looking like a pyramid as you go back in time, it really looks more like a diamond, widening then narrowing past a certain point. If you’re interested in reading about this in more detail, see Lorine McGinnis Schulz’ article “How Many Ancestors Do We Have????” from Olive Tree Genealogy.

Megan Smoleynak, a noted genealogist, wrote an article recently for Huffington Post called “Enough With the Famous Cousins Already!” which describes why having connections to these famous cousins is not a big deal.  At the end of the article, she provides her litmus test for these kinds of relationships, excerpted from her book Hey, America, Your Roots Are Showing

The next time you hear that celebrity A and celebrity B are cousins, ask yourself two questions:

If the answer to both of these questions is yes, then you’re dealing with a tweet-worthy announcement you might want to share with others. But if the answer is no, in the words of intensively-cousined Shania Twain, “that don’t impress me much.”

I will admit that it is still fun to find famous people in your tree. You need to have a little fun now and then. Just don’t expect to be invited to holiday gatherings for the famous cousins you may find.

Now if you’ll excuse me, I need to see my dear cousin Bill Gates about a job at Microsoft. I bet he knows some people there.

The photo of Mitt Romney is by Gage Skidmore [CC-BY-SA-2.0 (http://creativecommons.org/licenses/by-sa/2.0)], via Wikimedia Commons