As most of you know, I’m a big fan of Microsoft’s Windows Phone.  So when I found out that Microsoft was hosting an event in St. Louis, I registered as quick as I could.  Dubbed the “Windows Phone Inner Circle,” the 15-city tour was announced on the Windows Phone blog and promised food, drink, hands-on time with the latest phones, and a chance to win prizes. What’s not to like?

The event was at Malt House Cellar, a special event space in the basement of the Centennial Malt House, home of Vin de Set. This was my first time there, and if you’re in St. Louis and need a space for an event, you should checkit out. It used to be the entrance to tunnels for a brewery, and they’ve made it into a unique space with a couple bars, pool tables, and lots of cozy seating.  Having your event in the cellar did have one unfortunate side effect though… poor service for wireless devices. Something for the WP7 team to think about for future events.

Several members of the Windows Phone team were there, giving demos and answering questions about Windows Phone and about the handsets that were on display.  We had the opportunity to get hands-on with the Samsung Focus S, Samsung Focus Flash, HTC Radar 4G, and HTC Titan.  The Titan was the belle of the ball last night, mostly owing to its truly titanic 4.7 inch screen as well as the fact that it isn’t available for purchase yet.

I won’t go into specs or details here, you can click the links above for more info or Bing the names for any number of reviews.  I’ll just mention a few thoughts:

We were encouraged to tweet during the event with the hashtag #wpstl and each tweet was an entry into the drawings that were help throughout the night.  I’d tweet about the event even if there weren’t prizes, but I’m not one to turn down a free phone or other swag.  If you glance back at the title of this post, you can probably guess what happened… Yes, I was one of the winners. (If you thought something else, shame on you.) Remember I said I had a chance to hold one of the elusive Titans?  That’s because I won one, along with a Windows 7 skateboard deck.  The deck is literally the largest single piece of Microsoft swag in my collection.

I knew I had won even before they finished reading my name because whenever someone reads my name, “Scott” comes out first and then they hesitate on my last name. They’ll start to sound out the “L” then pause, then they just wing it and hope they get it right. Everyone there was thrilled that I had won. OK, maybe thrilled isn’t the right word.  What can I say? I seem to have good luck at these kinds of events. Count the Xboxes at my house for proof of that. Don’t hate me for being lucky.

Now I need to figure out what I’m going to do with the Titan. I just switched our service to Verizon from Sprint, and I’m not looking to open another account.  I’m torn though… it is a really nice phone. I think it’ll probably wind up on eBay in order to fund an upgrade in case Verizon offers something comparable. 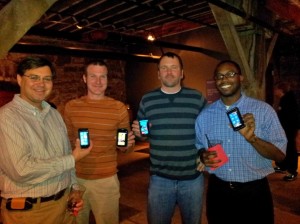