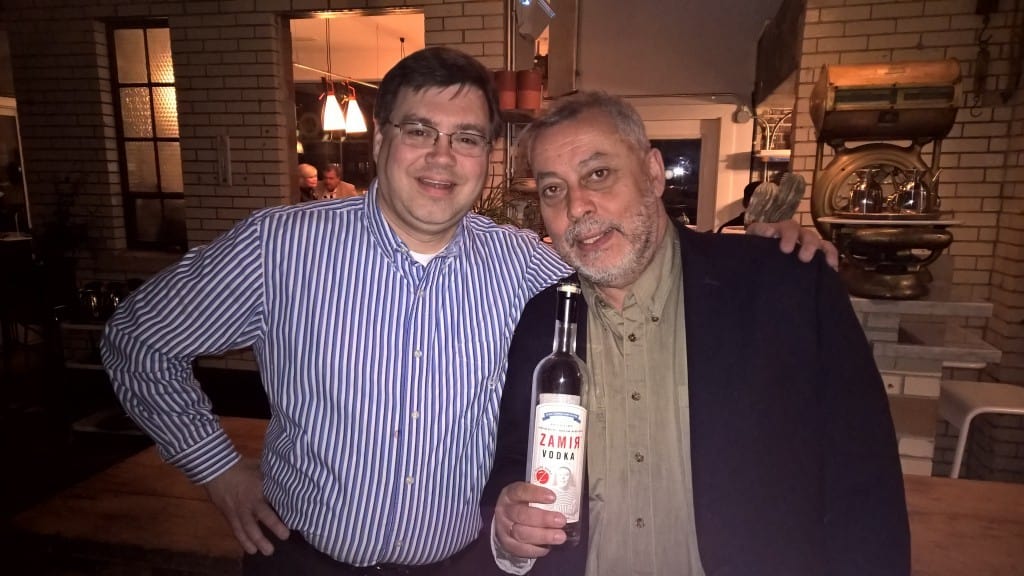 If you’ve ever watched the Anthony Bourdain shows such as No Reservations (Travel Channel) or Parts Unknown (CNN), you’ve probably seen an episode or two featuring Tony’s adventures with his friend and sidekick Zamir Gotta. If you haven’t, do yourself a favor and seek out those episodes. I’ve provided a list of his episodes at the bottom of this post. Some have video available for the full episodes, others are just links. Whatever it takes, they’re all worth the effort.

Those shows are how I was first introduced to Zamir. And just who is he? Well, I like how Tony describes him in his post for the Russia Episode of Parts Unknown:

But who, who is Zamir Gotta? This man who has, at various times tried to sell me a Transylvanian fixer-upper, a decommissioned Russian submarine, taken me foraging for mushrooms with the former KGB counterintelligence officer who ‘ran’ Aldrich Ames and Robert Hansen, made me a public enemy in Romania? Sidekick, entrepreneur, literary agent, film producer, broker of deals, would-be vendor of military hardware, cult hero, friend — he is all of those things and more. — Anthony Bourdain

He started his career as an English instructor for military interpreters in the USSR until the 1990s when he became a film producer. Since then he has produced episodes of various TV shows as well as two documentaries — Touch-Line (2009) and The Stage Awaits (2011). During that time he met Anthony Bourdain, and the rest, as they say, is history.

I started following him on Twitter back In November of last year. He arrived in St. Louis quite unexpectedly (to me anyway), and when the news hit Twitter, I immediately followed him and welcome him to St. Louis in a tweet. Within half an hour he replied with:

Truer words were never spoken. St. Louis does indeed rock, and his enthusiasm for the people and the places in St. Louis was evident over the next several days. People from out-of-town often overlook St. Louis when it comes to dining, lumping it in with the rest of “flyover country” or dismiss it as a joke with the old St. Louis standbys of toasted ravioli, pizzas with Provel, and so on. There’s nothing wrong with those things (except for Provel… the jury is still out on that one), but dining in St. Louis is so much bigger than that. The scene has changed drastically in the 20+ years I’ve lived in here, and if you follow events either in print in Sauce or Feast or online through those of us who seemingly spend all our time eating our way through town, you know that already.

Before he left, Zamir indicated that he’d be back in St. Louis the following year, so I was pleased to see that he was confirmed to be here this month as part of the launch of his new vodka, Zamir Vodka. I really wanted to attend at least one of the events, and the Russian dinner at Elaia was high on the list. Unfortunately the weekend before was my 25th college reunion and many of my friends were in town and/or staying at my house, so we were wiped out and way behind on work around the house. Earlier Feast announced that they were giving away two tickets to the dinner, and I entered, thinking that if I win, that’ll be the sign to forget about being responsible and getting things done and go meet Zamir.

Tuesday rolls around, and just after lunch I get an email from Heather at Feast letting me know that I was the winner! I called my wife, gave her the good news, and made our plans. In addition to meeting Zamir, this was also our first time at Elaia, one of Ben Poremba’s restaurants. Here’s the menu for this special evening. Click on the image for a full size view. I’ll touch briefly on each of the courses. 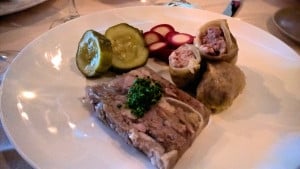 What a way to start. Everything was delicious. The highlights for me were the onion rolls, blini with caviar creme, and the jellied pig’s head. The onion rolls were warm with a moist onion filling and they have me thinking that I need to give those a try at home sometime.  I’m a big fan of any kind of smoked fish spread and the caviar cream was an ultra-elevated version of that. Great flavor in a silky soft form, and the blini were the perfect delivery mechanism. Lastly the pig’s head was in a forma that I usually avoid since the jelly consistency can be off-putting, but here the meat had such a great flavor that I helped myself several times. I think I was the only one at the table doing so.

My pictures aren’t very good because the lighting was low, and I didn’t want to annoy our fellow guests with a flash. but this one came out OK. 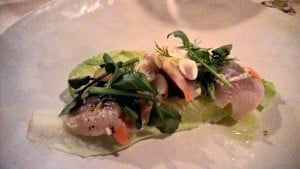 I grew up with smoked and other kinds of fish, so this choice called out to me. The fish was very salty, but in a good way. Loved it. 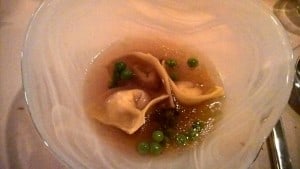 Ukha is made from fish stock, and nestled within were three pelmeni (dumplings) filled with smoked whitefish. As I mentioned before, I love smoked fish spreads, and when you would bite into these dumplings, the whitefish was smooth and warm and felt and tasted like heaven. I could have easily consumed an entire bowl filled to the brim with these dumplings. Probably my favorite course of the evening.

The short rib was very tender flavorful.  I’m a sucker for beef short rib when I see it on a menu. I’ve never had it like this before, but I grew up with beets always on the table at my grandma’s house. Her parents were form Poland, so beets, cabbage rolls, etc. were regular visitors to the table at her house. I sopped up what was left of the sauce after I finished the meat, putting more of that hearty bread to use. 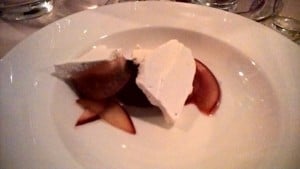 We each ordered a different dessert in order to try it. Pavlova (pictured) is a meringue cake topped with fruit, and this was a deconstructed version of that with pieces of meringue, whipped cream, and fruit. The Blinchiki were cheese-filled crepes, and while I normally gravitate towards fruit, I think these were my favorite of the two.

So, that was the dinner. Ben Poremba did a marvelous job, and I know we’ll be back to check out the regular menu at Elaia before too long. But this post was really supposed to be more about Zamir, so let me get back on track here… 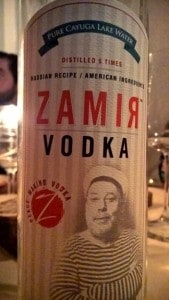 Zamir was exactly as I expected — warm, gregarious, gracious, with a little hint that under the right conditions (add vodka plus Bourdain) and things could get a bit crazy (and fun!). He talked about growing up in the USSR, working with Tony, an enlightening cross-country trip to Seattle and back many years ago on a Greyhound Bus, and of course his vodka. When I mentioned that we follow each other on Twitter, he remembered me and realized why I looked familiar — thanks to the profile photo that accompanies my tweets.

As for the vodka, I’m going to save that for a blog post to follow this one. I promise it’ll be shorter, but I want to focus on the vodka and let you know how you can help out and make it possible for more people to try Zamir Vodka.  His name, Zamir, means “I am for peace” in Russian, and as he explains it,  there’d be more peace and less conflict if people would stop and get to know each other (and themselves better). Food and drink are two of the best ways to help encourage and facilitate that type of communication. A little vodka can help with that (mindful consumption of course!). If you’re interested in helping brig a little more peace to the world through vodka, head over to the Zamir Vodka Kickstarter and make a contribution.

Now I don’t drink very often as you know, and vodka is not usually my drink of choice when I do, but of course I had to try it. And let me tell you that it was smooth, going down quite easy. So easy that I had two or three shots (or stopka) myself over the course of the evening.  If you get the chance to attend one of his tastings, do yourself a favor and go and try it. I think you’ll really enjoy it.

There are two more events in St. Louis while he is here. Tonight, on April 23, Zamir will be at Peacemaker (appropriately named) for Drink Like a Russian from 5 to 6:30 PM for vodka and oysters. On Saturday he will be at Olio at 5 PM for a vodka tasting with light hors d’oeuvres. Check out the links on Feast’s site for all of the details.

All in all, it was a wonderful evening filled with amazing food and great company. I can’t think Feast enough for the opportunity to attend.  I’d like to thank Ben Poremba and everyone at Elaia for their hospitality and fantastic cuisine.  And of course, I want to thank Zamir Gotta for opening his heart ot St. Louis and everything that is happening here. He’s a true friend to all of us, and I look forward to seeing him back here again and again. (And hopefully he can convince Bourdain to join him someday.)