I stopped by the St. Louis Microsoft Store this morning, right after it opened, to buy the new Microsoft Band, Microsoft’s entry into the fitness/wearable market. Last night I blogged about the Band, and shared how excited I was to get my hands on it to replace my FitBit Force.

There were a few other people in the store checking out the demo Bands (one of each size were available to try on), and store associates (wearing their Microsoft Band t-shirts) were still getting things setup, as shown by the pile of posters and other materials on a nearby table. I had already used the sizing guide to verify the Large band was the right one for me, a quick check of the real thing on my wrist confirmed it. It felt comfortable, but I’ll need to wear it for a few days to really tell. 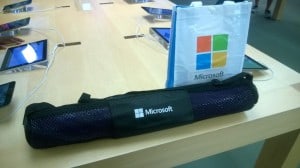 I added the $19 Microsoft Complete coverage. Complete extends your warranty to 13 months and covers one claim for water damage, torn band, broken clasp and other accidental damage. Small price to pay in my opinion. Along with the Band, I received a $5 Starbucks card and was invited to select from one of a few promotional items. They had Microsoft water bottles, jump ropes (with Microsoft on the handles), and yoga mats. I don’t do yoga, but I went with the mat (also properly Microsoft-branded).

You can see my yoga mat in the photo. And before you ask, yes the picture was taken in an Apple Store. After picking up my band, I made the short walk over to the Apple Store (they sit nearly across from each other at the mal) to buy an iPad Air 2 for my wife. Her license plates advertise that she’s a Mac user, so that tells you all you need to know. Ours is a mixed marriage, at least when it comes to technology platforms.

Returning to work, I setup the Band, and here are a few photos of the unboxing and just a couple showing the display in action. I’m not including any more screenshots, since you can see them all in action on the Microsoft Band page.

Setup was simple. After you attach the charging cable and connect it to a port with power, the phone starts up. You need to have the Microsoft Health app on your phone to setup and sync. If you don’t the Band will tell you it can’t find your Band and give you the URL to go download it. I installed it on my Windows Phone running the latest 8.1 Developer Preview. I was prompted to switch to Bluetooth settings and pair with the Band. Each device displays a PIN, and if they match you’re invited to accept on each device.

After pairing, it was back to the Health app, to logon. After logging in with my Microsoft Account, it asked for some additional info including weight, height, postal code, and whether I wanted to receive email offers and notifications. The last step was personalization. You get to name the device, pick a color and a wallpaper, and then you’re done. Pretty familiar process if you’ve ever setup a Windows Phone or a Surface, albeit fewer steps and choices. That’s it. Any further customization of settings from the defaults is done on the band.

There are only two buttons on the Band. a large power button in the middle and a smaller Action button. The action button steps through the items displayed on the home screen, showing steps, calories, heart rate, etc. Pretty familiar stuff to anyone who has used a FitBit or other fitness wearable. You swipe across the display to move to notifications and other options. You can scroll vertically to move between choices, tap to select, and then swipe vertically to scroll for certain items like email notifications or settings. All very intuitive and responsive.

That’s really all I have to say at the moment. I’m going to let the Band finish charging, and then I’ll start putting it through its paces. I’ll let you know what I think.