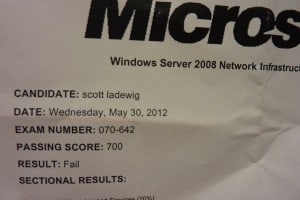 Yesterday morning I sat for the Microsoft Certification Exam 70-642, “Windows Server 2008, Networking Infrastructure, Configuration,” the second of three exams that leads to the Microsoft Certified Solutions Associate (MCSA). I scored 630 on it, but unfortunately 700 was the minimum to pass. Four letters started out at me: FAIL.

I let myself be upset for 30 seconds or so, thought to myself .”c’est la vie”, and headed home (to feed a hungry dachshund who simply cannot miss his lunch). I sat down and wrote down all the questions and answers that gave me problems before they faded from memory. I didn’t do this because I expect to see them on another exam, but rather to help me focus on the problem areas.

Looking at the questions, they had one thing in common – they were features of Windows Server that I don’t use at work. That’s not surprising. If you don’t use DirectAccess, those questions are going to be more difficult than questions about managing network printers. In fact, if I look at the list of skills for Exam 70-642 on the Microsoft learning site, out of 22 listed, I only use 9 of them at work. We don’t use DirectAccess, NPS, DNS, DHCP, or RRAS, for example. I would much rather use Windows DNS and DHCP than QIP (our solution here at the University), but that wasn’t my decision to make.

I often hear from other IT Pros that the tests always seem to focus on the areas in which we’re weakest or that we never use. Does that mean the test is flawed or unfair? No, of course not. It just means I have to work harder and study more in those areas.  The point of the exam and the eventual certification is to demonstrate that I’m a skilled Windows Server admin, not an admin skilled in only a subset of Windows Server. If it were the latter, well, my boss knows I know how to do the things I do every day, so having a piece of paper that tells him what he already knows isn’t of much value. The certification that says I am skilled in the breadth and depth of the product, now that’s the one that I want to have, especially if I’m looking towards the next stage of my career.

When you think about it, isn’t taking and failing the exam really the best pre-test skills assessment you’re going to have? Now I know exactly where I need to focus as I get ready to retake the exam. Sure, it might be a pricey “practice” exam, but there’s nothing like taking the real thing. Thankfully I used a voucher from Microsoft Learning that I won on Twitter so it didn’t cost me anything other than time (and a little pride).

The next time I post about taking a certification exam, however, it will be to report that I passed. Stay tuned.