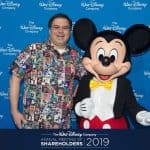 SPOILER ALERT: This post links to tweets and other media that talk about unreleased content from Captain Marvel, Dumbo, Aladdin, Avengers: Endgame (crossed off because footage was screened at CinemaCon on April 3), Toy Story 4, Maleficent: Mistress of Evil, Lion King, Frozen 2, and Star Wars: Episode IX . I’ll cross off titles as
Read More

It’s been two long years, but it’s finally time for Disney’s D23 Expo! The biennial ultimate Disney fan event starts Friday at the Anaheim Convention Center. I missed the first one in 2009, but I’ve been every year since. Last year was Kristin’s first time going, and she’s headed back with me again this year.
Read More

Back in May I was sitting on a plane, jetting off to Houston for the annual Microsoft TechEd conference. My mind wasn’t on TechEd, however, but rather on a curious photo I had obtained, and by the time I landed in Houston my blog post about the photo and what it might mean was published.
Read More

For the last three years, Disney Parks has kept some of its theme parks open for 24 straight hours for one day each year, giving guests the chance to stay up all night in some of the happiest places on Earth. In 2012, they celebrated the fact that 2012 was a Leap Year by giving
Read More

I’ve been home from my Walt Disney World trip for one week, and I’ve just now finished captioning and uploading my photos from the trip. I plan on porting a short write-up of the trip, and going through the photos was a good way to prep. Until I get that posted, feel free to flip
Read More