Kristin and I went with my dad to the auto show yesterday. There were a few interesting cars like the Chrysler Firepower, but overall not much to write home about. Aside from Chrysler and Infiniti, the majority of the cars at the show were pretty blah.

It seemed like we spent more time in line than we did looking at cars. In a bit of counter-programming against the Super Bowl, the auto show brought in two people from Days of our Lives to sign autographs. Eric Winter (who plays Rex Brady) and Kyle Lowder (who plays Brady Black) each spent a couple hours at the show, signing autographs and posing for pictures. So of course we waited in line. Both of them were really great with the fans, taking the time to answer questions and pose for photos. Would it have killed them to bring Farah Fath or some of the women from the show?

Because of the long line for Kyle, we didn’t get home until an hour or two before the game, so we were rushing a bit to get our Super Bowl snacks ready. It was just us and my dad, so we didn’t go all out, but we munched on chips and taco dip (yum!), shrimp cocktail, grilled shrimp skewers, brown sugar smokies, and other tasty treats.

The game was OK. I was pulling for the Eagles, but I didn’t really care that much. Overall I was really disappointed in the ads. There were a few good ones like the Pepsi ad with Carson Kressley and the CareerBuilder.com ads (monkeys are always funny), but that was about it. We were disappointed that Budweiser didn’t show the Clydesdale Snowball Fight ad that everyone was talking about before the game. 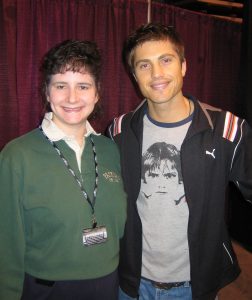 Kristin with Eric Winter (a.k.a Eric Brady on Days of our Lives) 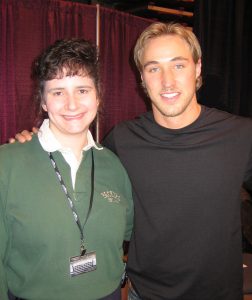 Kristin with Kyle Lowder (a.k.a. Brady Black on Days of our Lives)