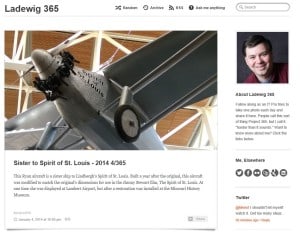 It’s a new year, and I’m making yet another run at Project 365. In case you don’t know, Project 365 is the general term for projects where people take a photo each day and post it somewhere.  I’ve tried it several times now and have yet to make it through an entire year.  In the past, I’d give up and abandon the project if I ever missed a day, but the point isn’t to have 365 (or 366) photos.  The point is to make the effort and stick with it even if an empty day sneaks in there now and then.

I did stop posting in my 2013 project, but that was because I simply became overwhelmed with projects and activities, not because I missed any photos (although I did miss some). I was still taking photos, so as I start my 2014 project, I’m also resuming posts to my 2013 project.

Speaking of Flickr… I just posted photos from our two days at Biltmore Estate. Take a look if you’re snowed/frozen in today like we are here in St. Louis.