Skip to content
HomeDisney24 Hours of Disney: The Night Before 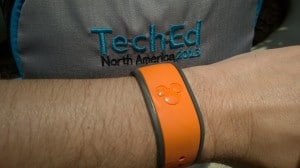 If you follow me on Twitter, you already know that I’m at Walt Disney World this weekend to spend 24 hours at the Magic Kingdom tomorrow. Disney is kicking off summer with a 24 hour party at select Disney Parks. California Adventure and Disneyland at the Disneyland Resort, and the Magic Kingdom at Walt Disney World in Orlando, will all be open from 6 AM Friday until 6 AM Saturday. I was unable to attend any of the previous 24 hour events, but when this year’s edition was announced, I immediately made plans to attend. I’m here solo because Kristin’s vacation schedule didn’t have any free days, but I’ve been to Disney Parks many times before on my own, and it’s still fun.

I don’t normally bring a backpack into the parks, but this event makes it necessary. I’m going to stash the bag in a locker as soon as I get through the gates.  In the bag I have a change of clothes, essentials (deodorant and mouthwash), several external battery chargers, a couple of AC adapters and cables, and a mini power strip. If you’ve ever been to Disney World in the summer, you’ll understand the change of clothes. It’s hot and humid, and 24 hours in the same clothes is unpleasant enough without adding humidity on top of it. Freshening up and changing clothes will help keep me going through the day tomorrow.

The batteries are necessary to keep the phone going throughout the day. The recent update for the Windows Phone 8.1 preview is supposed to have improved battery life, but if I start uploading photos, I’m still seeing a big drop off. My plan is to carry one charger with me and rotate back to the locker to grab a fresh one as needed and then take a break at some point and recharge whatever has been depleted.

My only goals tomorrow are to:

If you may recall, I did a similar challenge nine years ago, following the Ultimate Magic Kingdom Touring Plan from the folks behind the Unofficial Guide to Walt Disney World and what is now Touringplans.com. I call it the Disney Death March and during it I did everything at the Magic Kingdom (more or less). I rode the rides, watched the shows, saw the parades, and even watched the flag retreat. I didn’t do it in record time, finishing around 12 hours or so, but I did it. There are photos to prove it. Take a look at my Ultimate Touring Plan photo album of selfies (did we even have that term in 2005?) at each stop on the tour. I look pretty miserable in some and full of energy in others.

Buses start running around 5 AM, so I need to get to bed. I’ll be up early, earlier than I’ve ever been to go to the parks. Wish me luck, follow along, and if you want to see the Magic Kingdom live, let me know and we can Skype or something. I’ll have 24 hours to occupy myself and as much fun as Disney World can be, there’s going to be a lot of time just taking it easy.