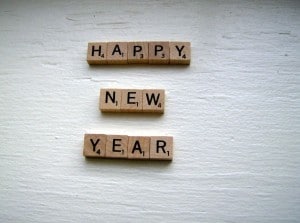 I’ll be honest. New Year’s is one of those holidays/events/happenings that is mostly lost on me. I don’t drink, I’m not a big party person, and most of my family and my closest friends are all out-of-town. So New Year’s Eve usually makes for a quiet evening, usually just watching a movie at home. Not that there’s anything wrong with that, but as festive evenings go, it isn’t in the top ten.

I think some of it is a carryover from Christmas. When you don’t have kids and, as I mentioned earlier, family and friends are scattered, Christmas gets to be less of an event every year.  You get out of it what you put in, I suppose, and the last couple years, I really haven’t put much in. Christmas 2012 was better than 2011, though, so maybe I can keep the trend going for 2013.

So what does 2013 hold? I know there won’t be any resolutions.  There are things I’d like to work towards such as blogging more, getting back on track for Microsoft certification, exercising more, and losing weight. I’m not going to make a big New Year’s deal out of any of it.  Resolutions never seem to last, and there seems to be a biological basis for that. Who am I to argue with science? I think the key for me is to manage my time better and find ways to motivate myself. Are these things really important to me? Are they more important than whatever it is I spend my time on now? If so, then I need to make some adjustments. if not, then I need to take them off the list.

I am looking forward to a number of things in 2013. I have some travel planned for the year, including a trip to San Francisco to see friends in a few weeks as well as the maiden Caribbean voyage of Princess Cruises’ Royal Princess in October.  TechEd 2013 is only 22 weeks away, and that’s always a highlight of my year. This year it gives me an opportunity to spend some time in New Orleans again. Disney’s D23 Expo is back in August, so I’ll be at Disneyland for several days. I’m hopeful that I can schedule a few more trips along the way.

As far as work, I’m hopeful things will get better and some long-discussed changes will actually occur. Maybe I can shed some of the load I’ve been carrying for the last several years on my own and get time to focus on the things I enjoy most.  If not, I’ll have to get more serious about exploring new opportunities. I updated the résumé last year, so I would hate for that effort to go to waste.

I didn’t really have a point for this post.  It just felt like I should blog something today to start the year. So having done that, now it is time to look forward and see what adventures await. 2013, let’s do this.